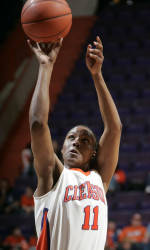 Hardy Collects Another Honor For 2006-07 Season

CLEMSON, SC – Clemson freshman Lele Hardy has been named to the Gballmag.com Young All-America Team, adding another accolade to her impressive list of honors for the 2006-07 season. The Lady Tiger was one of just 13 rookies from across the nation to earn recognition from the website and was one of only two players from the Atlantic Coast Conference to make the team.

Hardy led the ACC with a 3.27 steals per game average after recording 98 for the year. Her theft total set a school freshman record and ranked fourth for a freshman in conference history. She also ranked fifth in the nation for steals per game, the highest national statistical ranking for a Lady Tiger since 1993.

The Spartanburg, SC native was named to the ACC All-Freshman team and was a two-time ACC Rookie-of-the-Week honoree. She started all 30 games last season, averaging 11.6 points and a team-best 6.9 rebounds per game.

Hardy also etched her name in the Clemson annuals for steals by a freshman in a single game when she tallied eight against then-ranked #12 Vanderbilt on Dec. 3.

Tina Charles, 6-4, C, UConn. Selected as the Gballmag.com Rookie of the Year. The Rookie of the Year and second team in the Big East Conference, Charles was the only freshman among 52 players selected to the 2007 Kodak All-Region teams. She averaged 12.7 ppg. and 8.2 rpg., while shooting .599, which was fourth best in the country. She set the UConn freshman record for points in a game with 34, and also frosh records for double-doubles (11), rebounds (296) and blocks (81). She was 27th in the country in blocks (2.3 bpg.). Started 32 games.

Katie Madison, 6-1, C, Idaho. The top-scoring freshman in the country with 19.1 ppg. Madison received the Western Athletic Conference Newcomer of the Year award. She also grabbed 8.9 rpg., starting in 27 contests.

Danielle Wilson, 6-3, C, Baylor. A member of the Big 12 Conference All-Rookie team, Wilson scored 8.4 ppg., and averaged 4.9 caroms per outing. She blocked 2.5 shots per contest, which ranked 20th in the country.