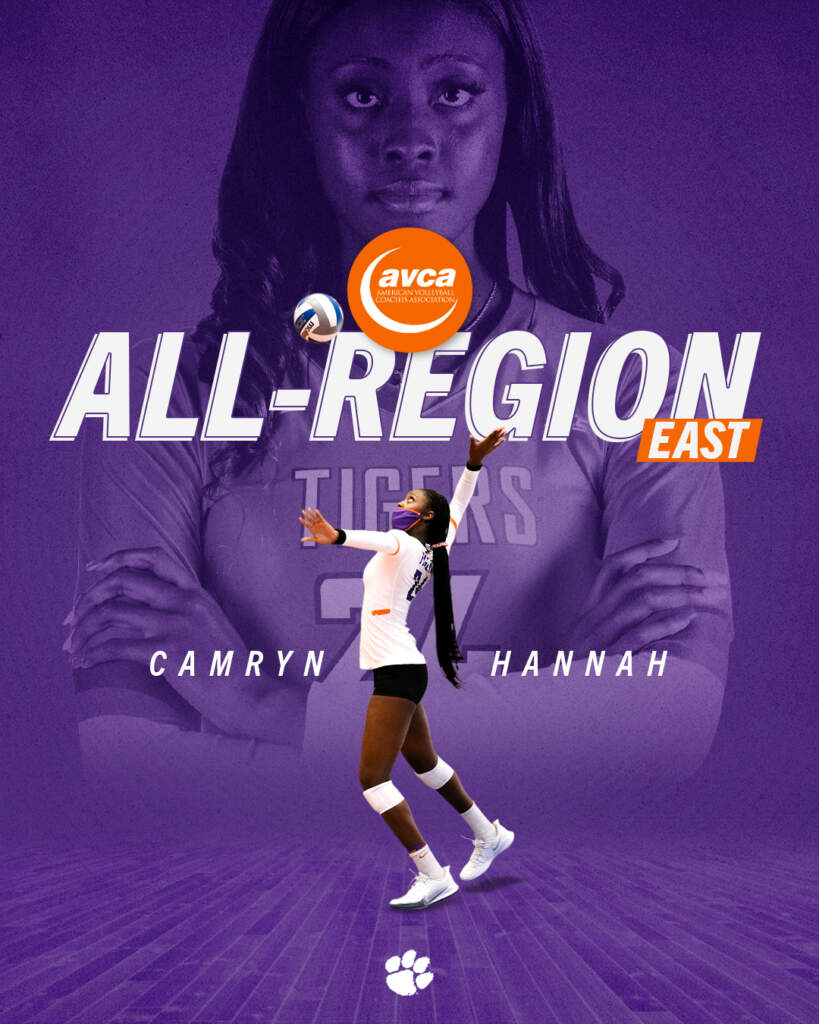 CLEMSON, S.C. – Clemson freshman outside hitter Camryn Hannah (Lansing, Ill./Marist HS) has been named an AVCA East All-Region recipient, the coaches association announced on Tuesday. Hannah is the first player under the direction of Clemson Head Coach Michaela Franklin to garner AVCA All-Region accolades, and the first Clemson Volleyball player to do so since All-American Mo Simmons earned AVCA East All-Region honors in 2013.

Hannah led all league freshmen during the ACC regular season in kills (306) and kills per set (3.97), which were good for second and fifth, respectively, in the conference overall. Hannah’s 306 kills were also good for second in the nation among all freshmen, while her kills-per-set average was good for 10th overall among all freshmen and fourth among Power-5 freshmen. She also finished second in the league in points (306) and seventh overall in the points per set (4.29), leading in both categories among all ACC freshmen. Hannah, a six-rotation outside hitter for the Tigers, also averaged 2.27 digs per set.

On March 10, 2021, the true freshman swept AVCA Player of the Week and ACC Player and Freshman of the Week honors after setting the ACC’s single-match kills record under the rally-scoring format with a whopping 37 kills at Syracuse (March 7). As a result, Hannah became the first player in school history to be named the AVCA’s Player of the Week. Her 37-kill performance is also tied for second-most by any NCAA player in a single match this season.

Hannah also became the only player in school history under the rally-scoring format to record a pair of 20-kill, 20-dig performances, nonetheless in a single season as a true freshman. Hannah posted 21 kills and 22 digs at North Florida (Feb. 12, 2021) and 27 kills and 21 digs against North Carolina (March 6, 2021).