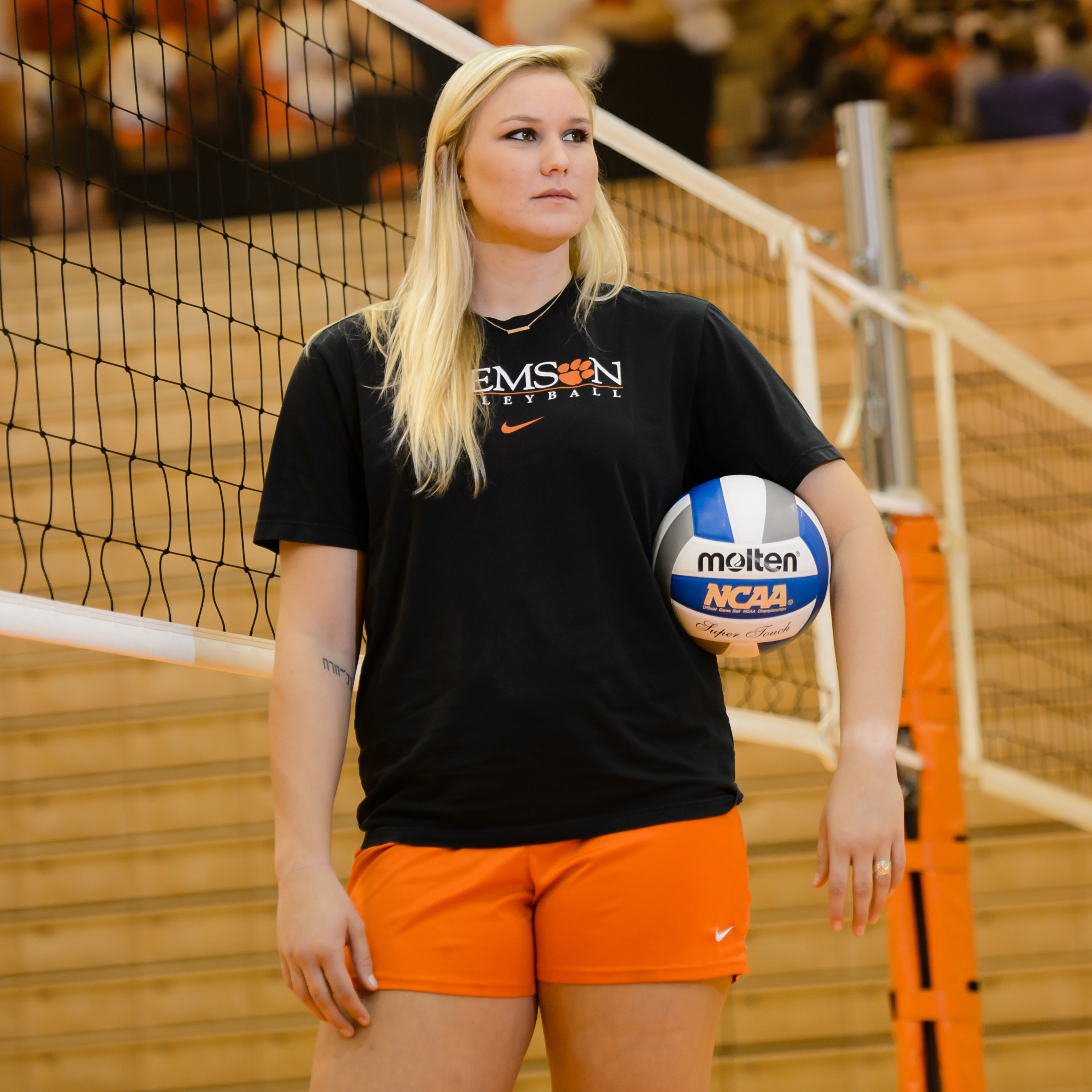 Note: The following article appeared in the November issue of Orange The Experience. Visit iptaycuad.com for more information on how to join IPTAY.

The journey of a thousand miles begins with a single step. For graduate student Haleigh Hampton, it’s a journey that’s still ongoing, one in which she has come very far. A native of Huntington Beach, Calif., Hampton is one of the first graduate students to play for the Clemson volleyball program.

Hampton was already enrolled as a graduate student online, and is currently pursuing a dual master’s PHD degree in public administration for grant writing and non-profit governance, as she aspires to run her own non-profit organization.

Hampton is heavily involved in the Fellowship of Christian Athletes, a non-profit, non-denominational student-led ministry organization, a group that’s had a profound impact on Hampton.

“I had been to South Carolina working for FCA, and I had friends that went to Clemson and were affiliated with FCA,” she said. “When they reached out to me, I got into the program and it was an opportunity to have my master’s paid for and experience something different,” she said.

Having been involved with FCA at Long Beach State University, Hampton’s decision to go the non-profit route was based upon her work experiences with the organization at LBSU. But Hampton said her faith wasn’t always where it is today.

“Christmas and Easter weren’t really big for me growing up, and I was definitely not following the Lord the first couple of years of college at LBSU,” Hampton said. “I struggled with substance abuse problems, and I really didn’t have any kind of God. If there was a God, it was volleyball. That’s where I found my worth; it’s what defined me and was the main thing I affiliated myself with.”

Hampton was certainly a dominant force on the volleyball court during her time at her previous stop, as she was a two-time All-Big West selection while also earning honorable mention All-America honors in three seasons for the 49ers, after sitting out 2012 due to injury. In 2013, she led the Big West with a 1.23 blocks per set average. She also had 773 career kills, including a team-high 330 in 2011, and 446 career blocks, ranking third in the nation in the 2010 and 2011 seasons.

Things took some unexpected turns her junior year at LBSU when she suffered a devastating shoulder injury, tearing her labrum, bicep and rotator cuff in the process. She was told the injury was career ending and she would never play volleyball again.

“Time after time I was continually getting hurt, and it wasn’t until I hurt my shoulder that they told me I would never play volleyball again,” Hampton said.

After being told she’d never play again, Hampton spent six weeks trying to fight the odds, as doctors were going to completely remove her bicep, but they were able to take out only the back portion of it. Four pins and two anchors were also placed in her shoulder to fix the rotator cuff and labrum. As a result, her chances of playing again increased. And it was the kind of opportunity Hampton was awaiting.

“Over the next year, I spent three hours a day, five days a week, in rehab, strengthening my arm and bringing it back,” she said. “I spent five months in a sling and it was nine months before I could even put my arm over my head.

“I couldn’t brush my teeth, drive a car, or even put on a shirt. I had no functional use of my right arm.”

Hampton felt as though she’d hit rock bottom, with her passion slipping from her in one fell swoop. But rather than sulk, Hampton decided to make a change. She became involved in the church and overcame her substance abuse problems, while finding renewed faith in God.

Six months later, while serving at church on Christmas, a pastor by the name of Jason Miller recognized her. Miller had been a volleyball coach and approached Hampton with the opportunity to work with FCA. Hampton then started attending worship nights and helping out with the program, even working as a missionary this past summer, which influenced her choice in career path of working with non-profit organizations.

“I worked with them all summer and saw a huge need for things in the ministry and within their missions,” Hampton said. “Everything that they do is their own support base, so they need big support for grant writing for funding of mission trips, facilities, Bibles and items for the kids. It sparked an idea that I played with for a year and I ended up here.”

FCA not only provided Hampton with a goal of what she wanted to do once she graduated. But it also gave her an outlet away from volleyball, and revitalized her in ways she could not have predicted. Volleyball wasn’t even necessarily at the forefront of Hampton’s mind during her move to the East Coast.

“Before coming to Clemson, I decided to retire from volleyball in December of my senior year at LBSU,” Hampton said. “After I came back from my shoulder, I was hit by a teammate by accident, breaking my leg and fracturing my femur, tibia, and tibia plateau, which I took as a sign that maybe I’m not built for this anymore. So, I took six months off to figure out what’s best for me.”

But when the Clemson volleyball program approached her about an opportunity, Hampton couldn’t stay away from the court for long, deciding to play for the Tigers as a graduate student.

“It was really Clemson that got me out of retirement,” she said. “I moved here over the summer, worked out, lived on my own and came back.”

Rehab was an ongoing process for Hampton, and the Clemson strength training staff challenged her, but she can’t argue with the results.

“It was the hardest thing I’ve ever done, and my last season wasn’t a great season, as my arm still wasn’t all the way there, so once I moved here, I worked out with D-love (Dennis Love, Clemson’s strength & conditioning coach),” Hampton said. “He strengthened my arm and it has never felt better. It swings like it used to, it just needed plenty of rest and a lot of strength training. But it’s back. Those guys are awesome at what they do.”

Hampton marvels at how far she’s come in a year.

“I just really figured out who Haleigh was,” she said. “I met my greatest friends, including my boyfriend, everyone through FCA. It amazes me that in six months I went from being a party girl and not really knowing who I was, to finding this identity in Christ that brought me to Clemson. I felt like God called me out here to Clemson for a reason.”

Hampton has had quite an adjustment period being over 2,000 miles away from the place she’s called home for over 20 years. She credits her teammates for being supportive of her, and as she continues her ongoing journey, she believes Clemson is the right kind of family atmosphere, even if her own family is across the country.

“It’s certainly a culture shock,” she said. “I wasn’t used to being away from home, but they’re a great group of girls who laugh and hang out, and they’ve definitely become my surrogate family on the East Coast.

“Clemson is awesome, especially with the athletic support we get at our games from the people in the community. Clemson’s all about family and tradition, and it’s that part that’s awesome.”