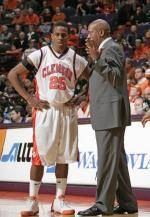 Clemson guard Cliff Hammonds was named to the ACC All-Freshman team on Wednesday. The Cairo, GA, native won the league’s Rookie of the Week award four times during the season, setting a school record. Hammonds is third on the Clemson team in scoring this year with a 10.0 average and is second in assists with 84.

Hammonds also leads the team in playing time at 30.2 minutes per game. He is on track to become the first freshman in history to lead Clemson in playing time and just the eighth to average double digits over the course of the season. He was named to Dick Vitale’s Most Improved Freshman Team last week as one of the top developing freshmen over the course of the 2004-05 season.

Also on Wednesday, Sharrod Ford was listed as Honorable Mention for the ACC All-Defensive Team. The senior finished the regular season third in the league in blocked shots (65).