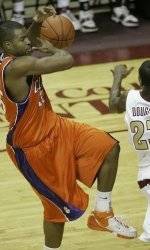 Hammonds Leads No. 23 Tigers Past Seminoles In ACC Opener, 68-66

TALLAHASSEE, Fla. (AP) -Cliff Hammonds grew up about a half hour away from the Florida State campus, a fan of the Seminole football and basketball teams.

He definitely was ready for Clemson’s matchup with the Seminoles on Wednesday night.

Hammonds’ layup with 3 seconds left lifted the 23rd-ranked Tigers to a 68-66 win over Florida State in the Atlantic Coast Conference opener for both schools.

“We couldn’t have executed that play any better,” Clemson coach Oliver Purnell said. “Cliff laid it over two tremendous athletes for the bucket.”

Vernon Hamilton, who led Clemson with 19 points, brought the ball up and fired a pass to Hammonds for the winner. Hammonds, a native of Cairo, Ga., also made a 3-pointer with 2 minutes left to put the Tigers in front 64-62.

“I had struggled the whole game shooting-wise,” said Hammonds, who was just 4-for-12 from the floor. “I had to finish it.”

Clemson (15-0) remains one of the country’s last three unbeaten major college teams, joining No. 16 Oregon and top-ranked UCLA, who both play Thursday night.

Hammonds played 37 minutes and needed two IVs after the game for dehydration.

“Oh, I’m so proud of him,” said Delma Hammonds, his grandmother and one of approximately 50 friends and family members at the game to cheer on the 6-foot-3 junior.

Hamilton shot 8-for-11 from the floor, including 3-of-5 from behind the 3-point arc.

“It’s huge for us, being 1-0 in the conference,” Hamilton said. “It’s going to be games like this every night. You’ve got to grind these games out.”

Thornton led the Seminoles with 19 points. Isaiah Swann scored 13 and Jason Rich added 12 for Florida State, which shot 46 percent and made 16 of 20 foul shots.

“They executed their game plan better than we executed ours,” Florida State coach Leonard Hamilton said. “We gave them a lot of unnecessary opportunities with our impatience.”

Clemson was 2-of-5 from the free-throw line.