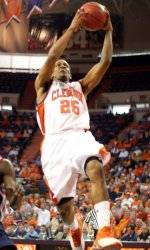 Taipei, Taiwan – Clemson senior Cliff Hammonds led the United States’ Athletes in Action team to a 5-4 record at the 2007 Jones Cup, which was held over the past nine days. Hammonds and his teammates finished tied for third in the Cup standings, while Jordan claimed the trophy in a competitive field after a 7-2 record.

Hammonds and his teammates recorded wins over national teams from Qatar, Korea, Lebanon, Kazakhstan, and Japan. The tournament began with a loss to the Philippine national squad. AIA also lost to Jordan early in the tournament before reeling off three straight victories from July 6-8.

The Cairo, GA native played well in the final two games, both of which were AIA losses. He posted 14 points on 5-10 shooting (including 3-5 from three-point range) versus Chinese Taipei, then concluded the tournament with a team-best 20 points in a loss to Iran on Tuesday. Hammonds hit 7-9 shots overall, including 5-7 from three. He added five rebounds and three steals in a fine all-around effort.

“It was a great experience for us to come here and play against international competition,” Hammonds said. “Our main goal was to come and glorify God and I think we did that on and off the court. We played as hard as we could. Coming down the stretch we just didn’t have any legs left. We haven’t played in a real game since the end of the college season, so nine games in nine days took its toll on our bodies and it showed a lot tonight.”

Hammonds was the only player on AIA’s 12-man roster to play at least 18 minutes in every game, with a high of 30 coming against the Philippines in the tournament opener. He shot 38.7 percent on three-point attempts, including 8-12 in the final two games. He had a 3.0 assist-to-turnover ratio and averaged just one turnover for every 30 minutes played. Hammonds also contributed 11 steals in the nine games, an average of 1.2 per contest.

In addition to his outstanding work on the court, Hammonds and his teammates also visited local orphanages, conducted clinics, and preached the importance of faith to the people of Taiwan.