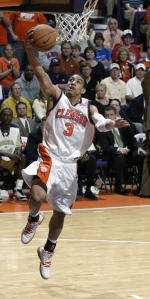 Greensboro, NC – Clemson junior point guard Vernon Hamilton was named to the ACC All-Defensive Team, the league announced Monday. The Richmond, VA native received three votes for Defensive Player of the Year and was runner-up in total votes with 91. Duke center Shelden Williams was a unanimous selection to the team with 106 points. Joining those two on the All-Defensive Team were Jamon Gordon (Virginia Tech), Cedric Simmons (N.C. State), and Zabian Dowdell (Virginia Tech).

Hamilton established Clemson’s single-season and career record for steals in 2005-06. He totaled 78 steals in the regular season and leads the ACC at 2.79 per game. After tallying four thefts in Clemson’s last game, a win over Georgia Tech, he became the school’s all-time leader with 196 steals. He passed Terrell McIntyre’s mark of 194 in just under three full seasons. He currently ranks in the top 10 in ACC history with 2.23 per game.

Hamilton has posted at least three steals in 18 of the 29 Tiger games this year, with a season-high of six in a win over Wofford on December 6. In ACC play, he has been even better with an average of 3.13 per game. He has been the main reason Clemson ranks third in the nation with an average of 11.1 steals per contest. The Tigers also ranked in the top 10 in that category in 2004-05, thanks in large part to Hamilton.

Hamilton also has flourished offensively for the Tigers this season. He is the team’s second-leading scorer at 12.1 points per game, which includes a career-high of 31 against then #1 Duke after coming off the bench. In Clemson’s most recent game against Georgia Tech, he posted 24 points on 8-11 shooting. Hamilton also is second on the Tiger team with 88 assists.