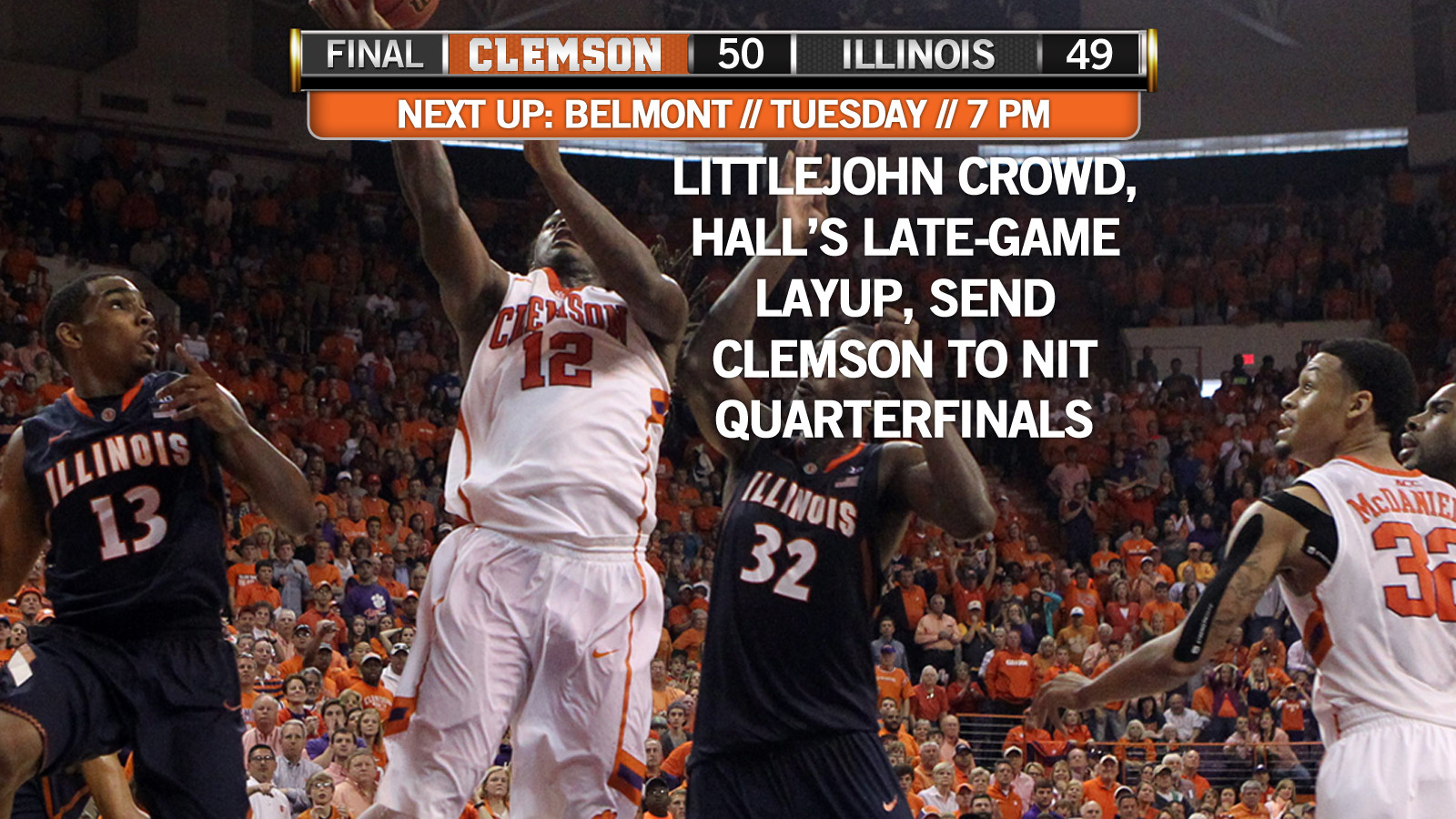 CLEMSON, S.C. – Playing in front of a standing room only crowd in Littlejohn Coliseum, Clemson survived a back and forth battle with Illinois in the second round of the NIT and advanced to the quarterfinals after Rod Hall‘s layup with 9.3 seconds left gave Clemson a 50-49 win. The Tigers advance to face Belmont at home Tuesday for the right to play in New York City. The game is scheduled for 7 p.m. and tickets are available immediately on ClemsonTigers.com. Fans are encouraged to use the print at home option for the event.

Trailing by a point after Jon Ekey buried his third trifecta of the second half, Hall drove the lane after a pair of stops by Clemson and connected on a layup from the right side. Illinois hoisted a long three after a timeout, but Clemson retained possession after a loose ball rebound. With 1.7 seconds left, the Tigers threw the ball the length of the floor, where Hall saved it from going out of bounds. The clock expired to seal the win.

The game featured just two lead changes, both in the final two minutes, but it was closely contested most of the day. The Tigers built a nine-point lead midway through the first half, but the Illini stayed within striking distance the rest of the way. The win was Clemson’s seventh decided by five points or less this season.

The Tigers shot 49 percent for the game, compared to Illinois’ 38 percent. Other than Ekey, the two teams combined to shoot just 2-for-25 from three-point range. Clemson blocked nine shots Sunday, matching its high from the opening NIT win over Georgia State. Clemson won the battle of the boards, 32-25, despite being short regular starter Jaron Blossomgame.

Landry Nnoko made 5-of-7 field goals and finished the game with 11 points. Also reaching double figures for the Tigers were K.J. McDaniels (12) and Jordan Roper (10). McDaniels scored eight of his points off dunks. He also tallied four blocks Sunday, while Nnoko registered three of his own. Hall finished with five points Sunday.