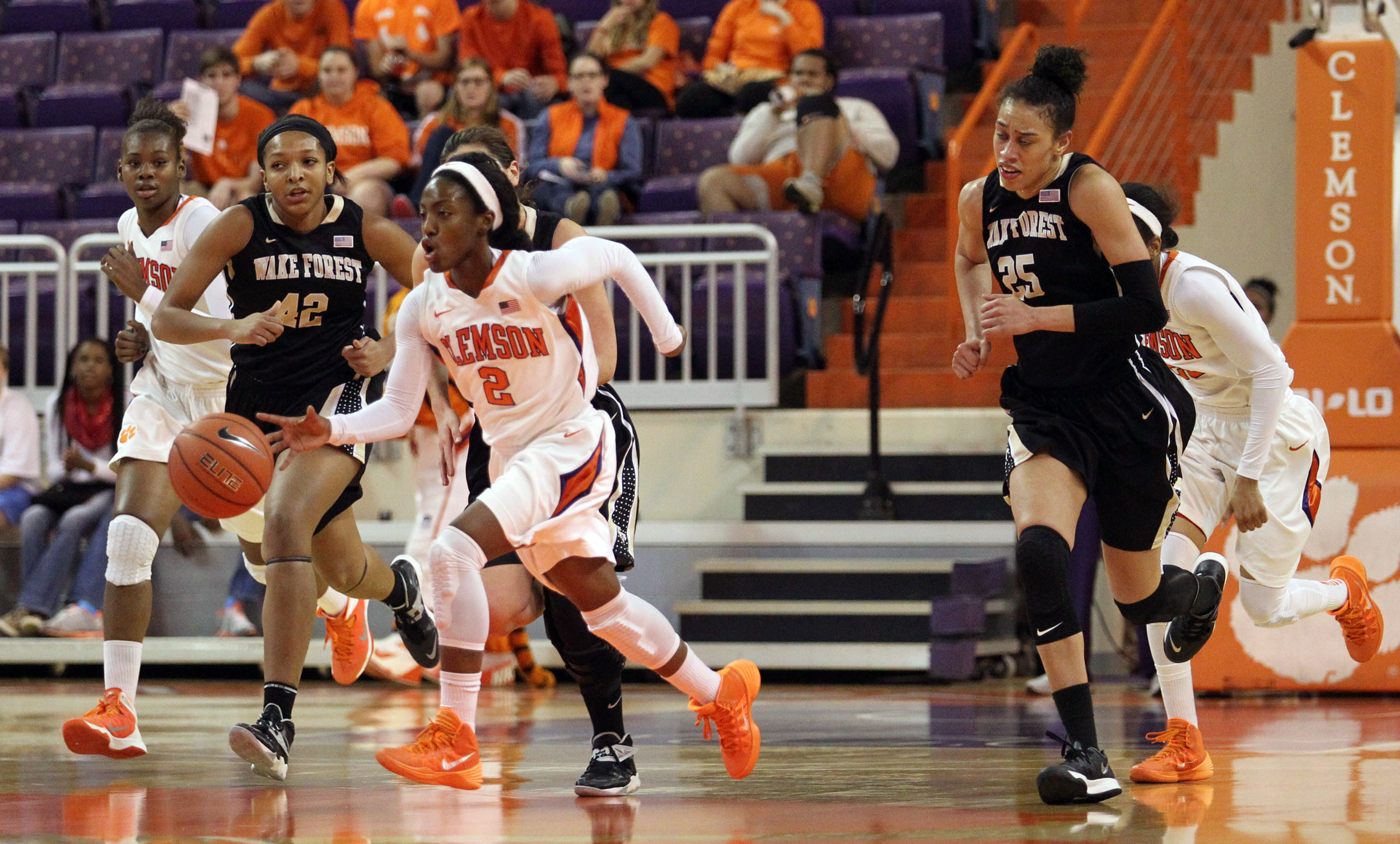 Clemson goes into halftime trailing by three points after shooting 11-31 (.355) from the floor. Junior wing Nikki Dixon scored 12 points in the frame to lead the Tigers, and sophomore post Nyilah Jamison-Myers had eight points and seven rebounds. From the outset, Wake Forest fed Dearica Hamby, a talented forward averaging 20.6 points per game entering Monday night’s contest.  Hamby did not disappoint converting two early baskets to stake Wake to an early lead, prompting Clemson to switch to zone defense. While both teams utilized full court pressure early, the Demon Deacons’ pressure was much more effective leading to several early Tiger turnovers.  Wake Forest was able to break the pressure with ease, leading to several early scores in transition as the Demon Deacons were able to mount an early lead. However, the Tigers did go into halftime with a 12-9 advantage in terms of points off turnovers, as each team committed 11 miscues.  Both teams had 30 field goal attempts, 20 rebounds, seven assists, 11 turnovers, three blocks, and six steals.  What Needs to Happen in the Second Half: Offense  The Tiger offense is at its best when Nikki Dixon and Chancie Dunn are driving.  Both are skilled dribblers that have the potential to finish at the rim.  They also have the option to kick the ball out to several options from long range, notably Kelly Gramlich and Jordan Galliard. Clemson has only made two field goals that were not layups, a three by Galliard and a long two by Gramlich.  The team has been able to reach the basket with ease and must continue to attack following the intermission. Defense Hamby has been superb for the Wake Forest in the first half leading the Demon Deacons with 16 points on 6-10 shooting.  The physical forward is especially deadly from the free throw line where she has converted four of her five attempts.  Jamison-Myers and Sade Chatman must limit the effectiveness of Hamby in the second half. While Hamby may average 20.8 points per contest Chelsea Douglas is not far behind with 18.4.  Douglas has been extremely effective in transition and the Tiger guards must be quicker getting back on defense.  First Half Notes: Nikki Dixon drew two charges in the opening half of play, her second consecutive game drawing two charges.  Dixon reached double-digits after converting two free throws with 7:10 remaining in the opening half, recording her 50th career game in double figures. Nyilah Jamison-Myers took a charge at the 7:25 mark.  This is the first time all season the Tigers have taken three charges in a half.  Jamison-Myers also had a season-high of 7 rebounds.  Her previous high was 5 rebounds. Kelly Gramlich nailed a long two at the 8:09 mark, the first Tiger field goal that was not a layup. Down 20-14, the Tigers began a pivotal 10-0 run.  Clemson surged to its first lead following a Dixon free throw at the 7:10 mark in the first half giving the Tigers a 21-20 lead. Jordan Galliard has made her last five consecutive three-point attempts after drilling a three at the 3:44 mark of the opening half.