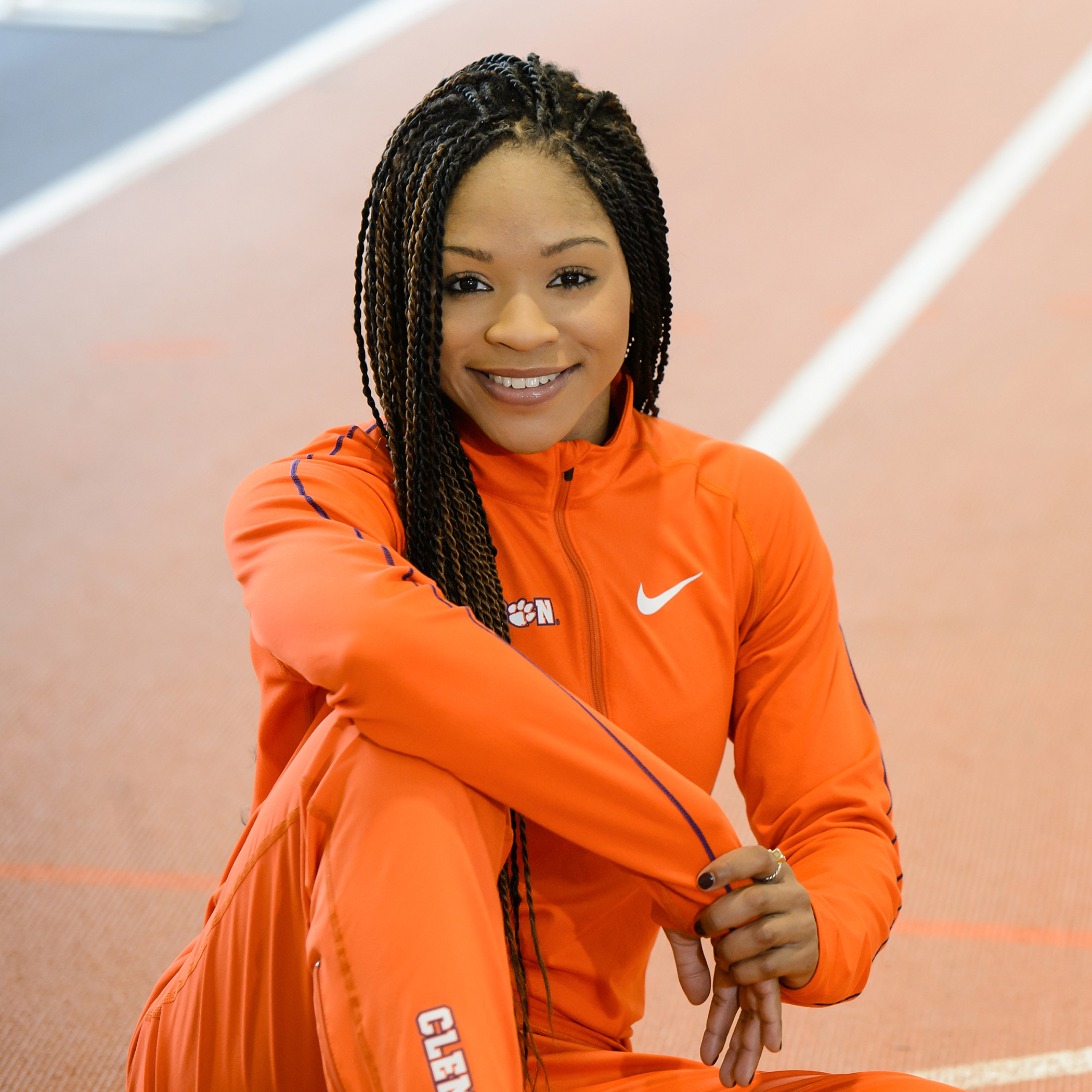 As a redshirt sophomore, Sabria Hadley can already say she is one of the fastest track & field athletes in the ACC. Anyone who has met her will tell you when it comes to her sport, she is one of the hardest-working student-athletes attending Clemson.

What fans don’t know is that Hadley’s work ethic is not just a means to become one of the best short sprinters in the ACC, it has been a means to survive as an athlete since she was a young girl.

“I’m glad I got to know her and I’m glad I’m her coach,” said assistant coach Marvin Gibson. “Athletes like her…they don’t come around that often. More people should know her story. You look at her times and what she’s accomplished, but people should know what she has endured to be where she is today.”

Hadley grew up in Lake Wales, Fla., as a competitive cheerleader. In the seventh grade, her physical education teacher gave her class a test. They were to run 100 meters, and if they didn’t run fast enough, they would have to run more.

The threat of more running was all the motivation Hadley needed to run as fast as she could. At that moment, the track coach took notice and asked her if she would run on the team. Hadley politely declined, but it did not matter. The coach had already reached out to her parents, and she was strongly encouraged to join the team.

She began running for the school and a club called Florida Elite. However, just as quickly as her career in track started, her future in the sport was threatened due to a knee injury she suffered as a cheerleader.

After six hours of surgery, the doctors realized her injury was more severe than they had originally thought. The seventh grader had torn her ACL, MCL and both of her menisci, leaving the chances of her ever competing at a high level slim.

“At first I was discouraged because I was in love with competitive cheerleading and I was in love with track,” admitted Hadley. “But my mom and I would pray together, and she helped me realize that days would get better and that my situation would definitely get better.”

Working through a year and a half of rehab, Hadley found herself competing again and began training with her cousin and current adidas runner, Octavia Smith. Her father, Stanley, was the one to bring out the best in her.

“I always knew I was good, but he was the one to make me realize that I could earn a scholarship to a great college and possibly one day be paid to run. He made me realize how good I could actually be.”

With her ceiling realized and new aspirations in place, Hadley took her sprinting to a professional level. She soon started to receive scholarship offers as a sophomore in high school, and Clemson was one of the last schools to knock on her door.

She jumped at the opportunity to become a Tiger, knowing that it was the perfect place to accelerate her career after seeing what the Clemson program was achieving on the track.

When Hadley arrived on campus, she was met with another challenge. She was coming off her second knee injury that she had suffered during her senior year, while new coaches had taken over the Clemson program.

“Sabria and I struggled the first year,” stated Gibson. “Me being the new coach coming in, I didn’t recruit her and I know how that is. You leave home, you go to a place unknown and then you have to meet a new coach. There’s a different bonding that has to take place at that point.”

As a rookie, Hadley underachieved by standards she and Gibson set for herself. She was the second-fastest sprinter for the Tigers behind Whitney Fountain, with season bests of 7.66 in the 60m and 24.39 in the 200m. To add to the frustration, Hadley endured another knee injury, was forced to redshirt and was again told that the chances of competing at a high level ever again were unlikely.

She was unfazed, her goals never wavered and she refused to lose to another injury.

“It’s remarkable,” said Gibson. “She’s very tough and when she sets her mind to something, she has taught me she’s going to get it done. There’s nothing now that Sabria will tell me and I’ll doubt her. For a small person, she’s a giant. Inside you’re really looking at a giant in a small frame.”

After Gibson made it his business to get to know her better and bond with her in the summer, Hadley came back in the fall of 2014 and told him that she was going to be an ACC champion despite the third knee injury.

In the indoor season, Hadley finished seventh at the ACC Championships in the 60m with a time of 7.46 and ran Clemson’s fastest 200m time to place fourth with a time of 23.98.

Still not satisfied, she continued to push for more in the outdoor season.

She began with a bang, qualifying for the finals and finishing eighth with a time of 11.32 in the 100m at the Texas Relays. She followed up with an 11.37 in front of a home crowd at the Florida Relays the next week to take sixth. At that time, it reminded Gibson of what she said to him in the fall about becoming an ACC champion.

On the final day of competition at the ACC Outdoor Championships, Hadley enjoyed the best day of her college career. As a redshirt freshman, she won the 100m with a meet-record 11.28. She also ran the third leg of the gold-medal 4x100m relay team that qualified for nationals. She won silver in the 200m with a 23.04. Her efforts combined for a total of 28 points in Clemson’s championship effort.

In 2016, Hadley came back even faster for the indoor season. She ran a personal-best 7.36 in the 60m and an indoor personal-best 23.35 in the 200m. At the ACC Championships in Boston, she was second with a 23.52 in the 200m and placed fourth in the 60m behind her teammate, ACC champion Myasia Jacobs.

Hadley set indoor bests in both short sprints, and her 200m time qualified her for the NCAA championships for the first time as an individual. As she turns her attention to outdoor season, her time of 11.28 in the 100m set last year is the third-fastest time in Clemson history, and the 23.04 is the sixth-fastest time by a Tiger in the 200m.

Gibson can’t sing high enough praises of his young sprinter. Formerly a coach at Louisiana State (2005-11) and Oklahoma (2012,13), Gibson claims that Hadley is one of the top five student-athletes he has ever had the pleasure of coaching.

“To this day, I’m very glad I got to know Sabria Hadley,” he said. “She’s an awesome young lady and she’s helped me in a lot of ways, not just with track. She’s very strong in her faith, and that’s something she even helped me with. If I was able to do it all over again, I don’t know if I would have it any other way.”

“That would be awesome,” added Gibson. “From getting news from doctors that you won’t run at that intensity again, and then you qualify for the Olympic Trials…that would be a testament to her commitment to being successful and not letting anyone else determine her destiny.”