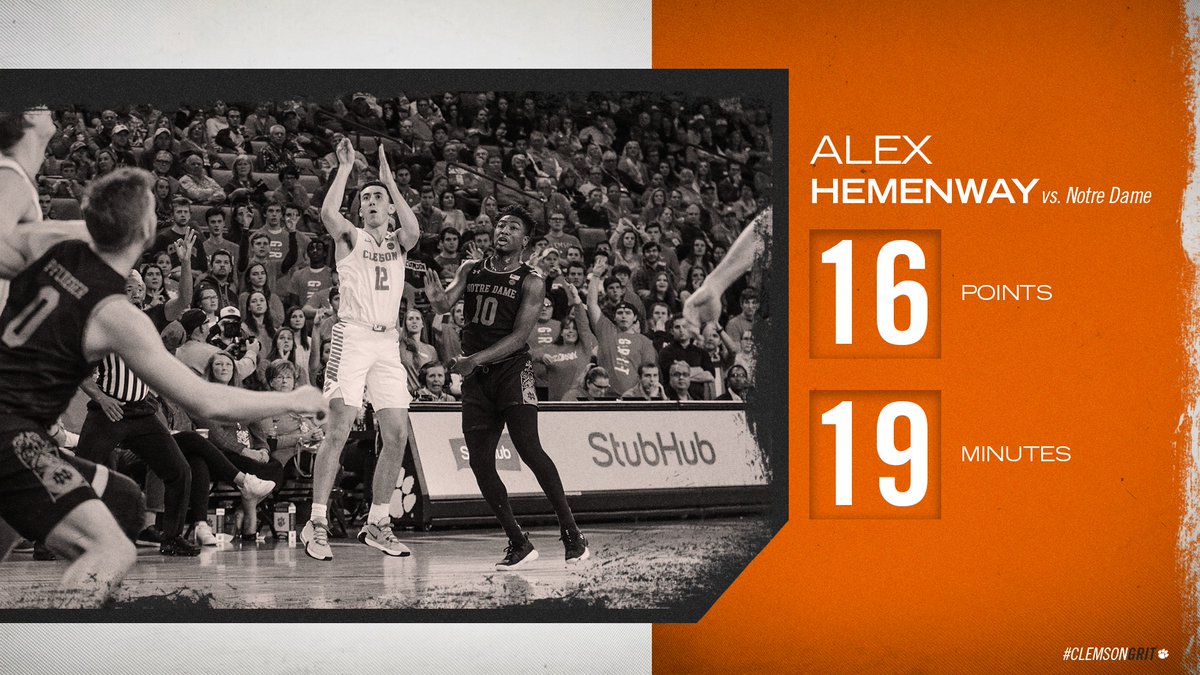 Alex Hemenway scored a career-best 16 points for Clemson on Sunday night inside Littlejohn Coliseum, giving the Tigers a scoring boost off the bench in a 61-57 loss to Notre Dame. Hemenway, just four games back from a severe high-ankle injury that sidelined him for more than two months, finished 5-for-8 from the field and 4-for-7 from behind the three-point line.

“He made a couple shots in the second half of the Louisville game, and then made some big shots for us tonight,” said Head Coach Brad Brownell. “Hopefully he can build off of that and take advantage of the opportunities he is getting.” 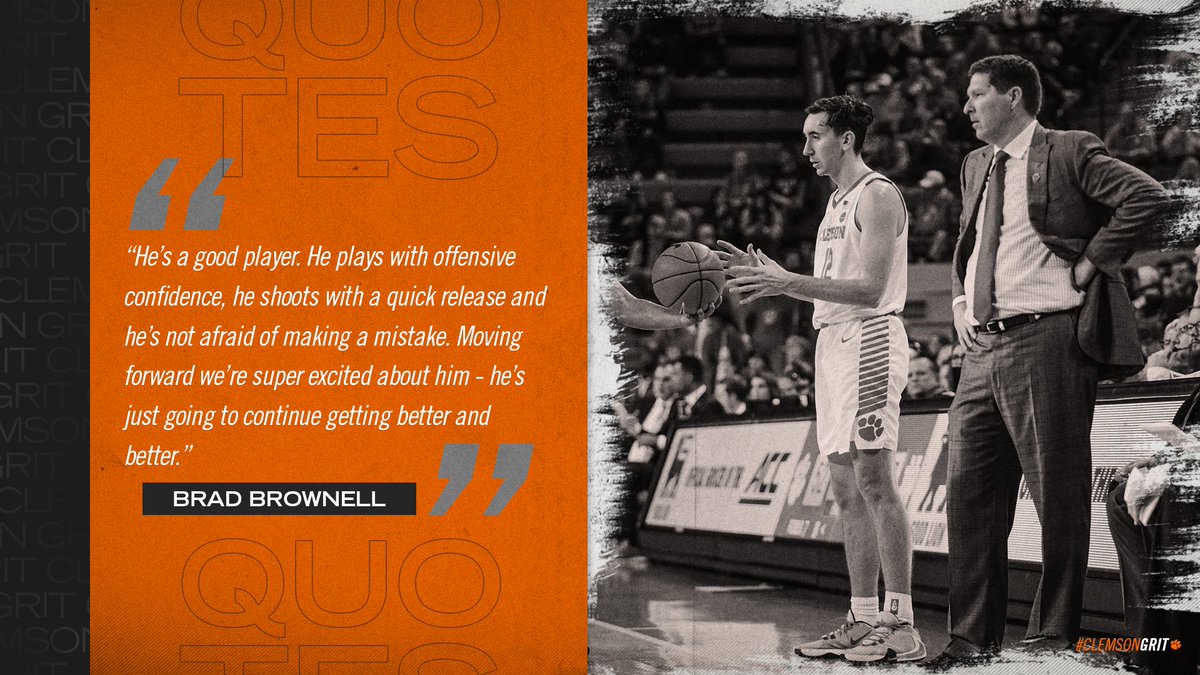 This season has not gone the way the three-star prospect out of Newburgh, Indiana had imagined his freshman campaign would, after suffering the ankle injury in the Tigers’ second game of the year.

“The first few weeks back it was very difficult, just getting the range of motion back, and getting back to the pace of play of the college game,” said Hemenway. “In practice the last couple weeks, I definitely feel that it’s getting better and stronger and I think that’s showing on the court.”

The 6-3 freshman checked in off the bench at the 5:27 mark of the first half and didn’t take long to make his presence felt, knocking down his first three-pointer just 24 seconds later. The next trip down the floor, the freshman sunk his second trey of the game, giving the Tigers the lead for the first time since the 18:41 mark. Hemenway found Trey Jemson fighting towards the basket just as the half closed, to pick up his first assist of the game and give Clemson a 29-27 halftime advantage.

In the second half, Hemenway kept the Tigers toe-to-toe with the Fighting Irish. With just over 10 minutes to play, Hemenway splashed his third triple of the night, giving Clemson the lead back 41-39. The triple also moved him up to nine points, a career high.

With Clemson trailing by four with under six minutes remaining, Hemenway knocked down a jumper in the paint, and then his fourth three-pointer of the game on back-to-back possessions to move the Tigers to within two, 50-48. Hemenway secured his 15th and 16th points on free throws at the four minute mark to tie the game at 50.

The Indiana Assassin finished with 16 points, one assist and one rebound in 19 minutes of action.

A trip to Pittsburgh is next on the docket for the Tigers. Clemson will square off against the Pittsburgh Panthers (15-9, 6-7) at the Petersen Events Center on Wednesday, Feb. 12 at 9 p.m. The game will air on a regional sports network (RSN). 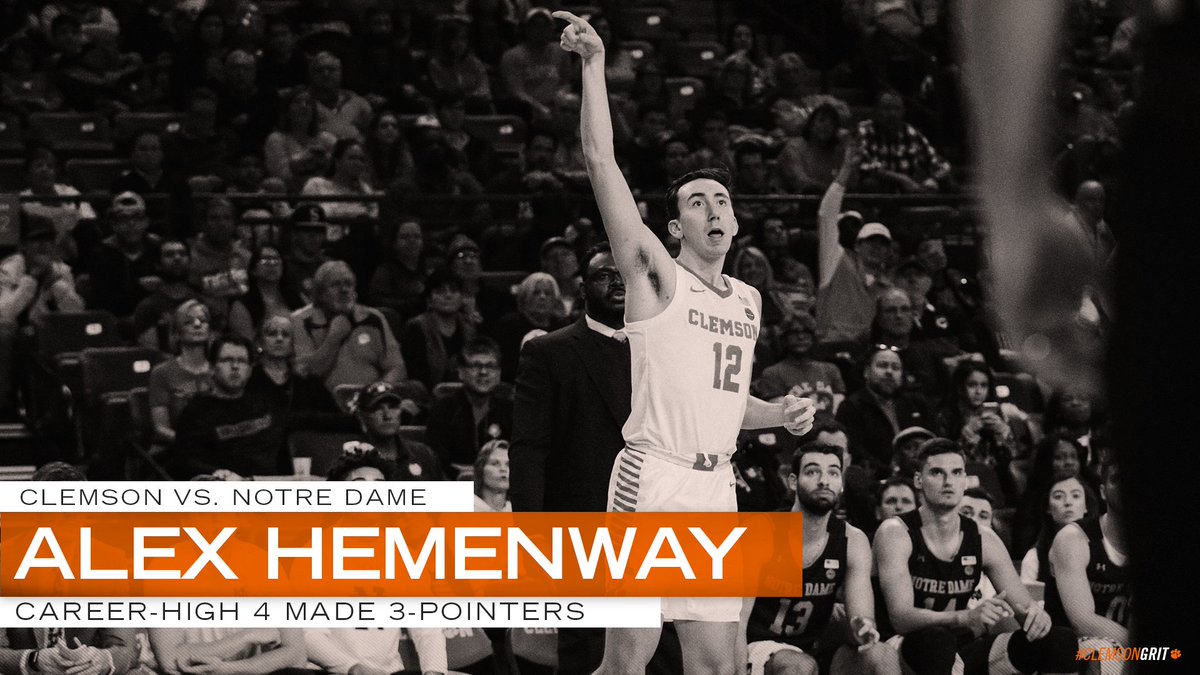 Alex Hemenway get you some! @ClemsonMBB

Alex Hemenway with a new season-high 9️⃣ points on 3-of-5 shooting and two triples 🔥🎯👌#ClemsonGRIT pic.twitter.com/8eZq1nWKrf