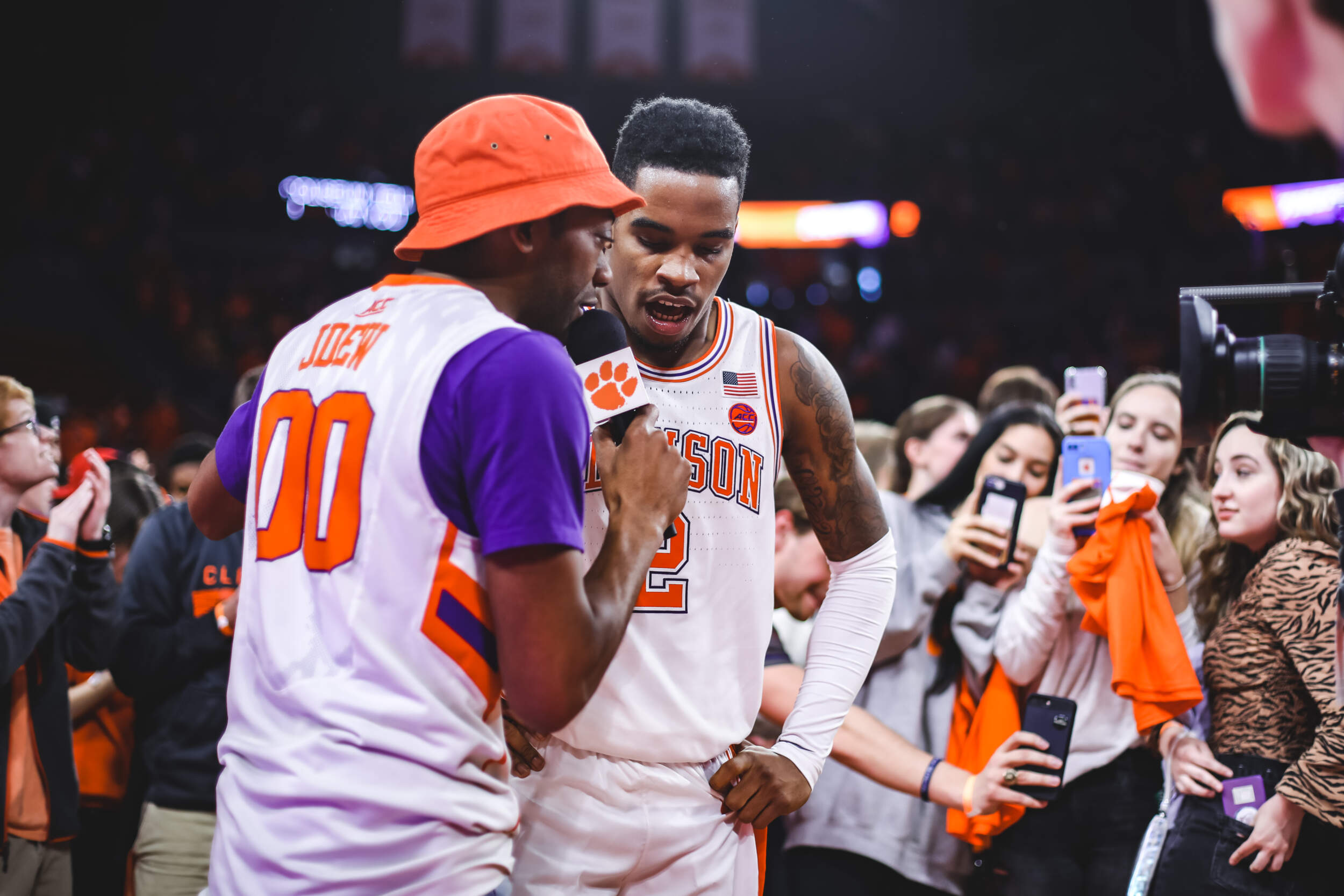 Al-Amir Dawes grabbed the inbound pass with nine seconds remaining on the clock, down by one point to the No. 6 ranked team in the nation on Saturday afternoon inside Littlejohn Coliseum.

Dawes drove the length of the floor, making a behind the back move to get  past the Florida State defense at halfcourt. The freshman hit a hesitation move at the three point line and drove the lane dribbling with his right hand. Running towards the basket, Dawes switched hands mid air finishing the left handed layup with one second left on the clock, putting the Tigers up by a point.

The Seminoles threw up a desperation heave as the clock struck zeroes, as Dawes and teammates saw Clemson fans and students rush the court for the third time this season, defeating its third top-10 opponent on the hardwood of Littlejohn Coliseum.

“It was a heart-beating moment,” said the Newark, N.J. native, Dawes. “In my head, I was just going to get it and go, and the outcome would be the outcome. And that’s what happened.” 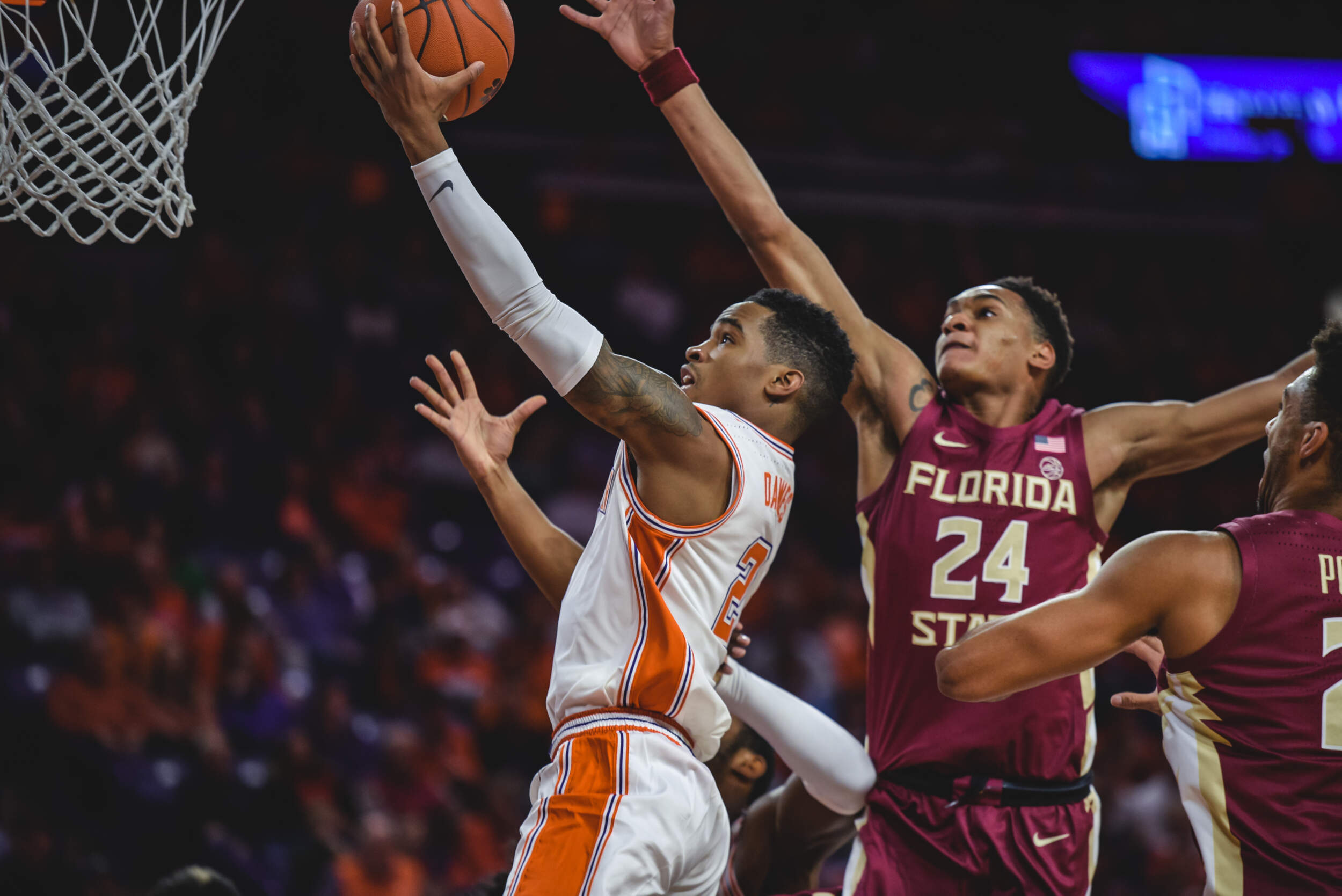 Dawes has really stepped up in the month of February for the Tigers. The freshman is averaging 11.6 points during the month. In Clemson’s three home wins against the top of the ACC standings (Louisville, Florida State, Duke), Dawes is averaging 9.3 points in helping the Tigers hold a 3-0 record against top-10 teams at home.

“Al-Amir [Dawes] was terrific at different parts of the game,” said Head Coach Brad Brownell. “The play at the end of the game, we just decided to let him go and see what would happen. I was just screaming to go to the basket, and he went in there and made an unbelievable play.” 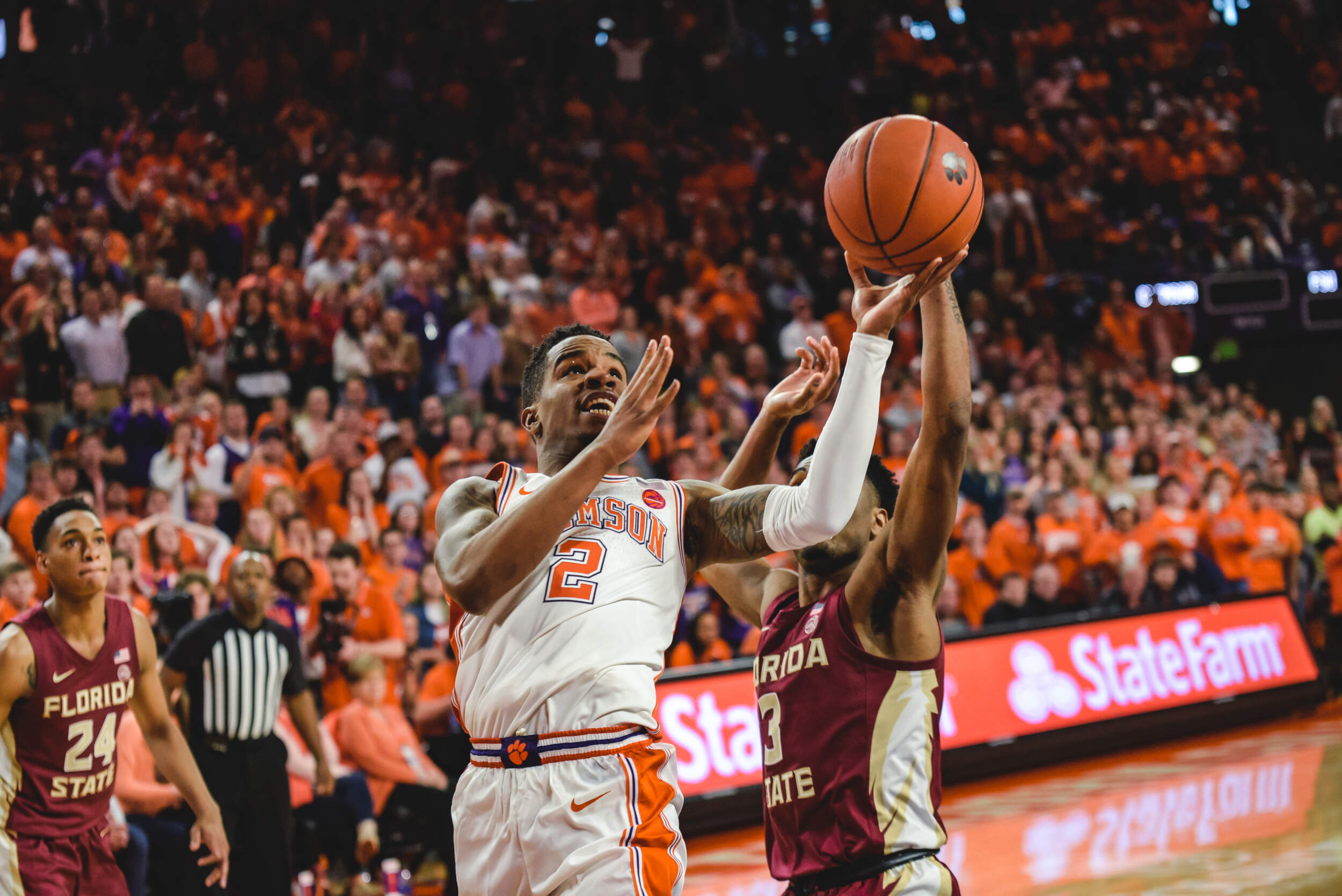 Dawes finished with 18 points, with 13 of those coming in the first half. The freshman scored just five points in the second half, but the biggest basket of the game came off his fingertips with a second left in the contest. The 18 points came on 8-for-18 shooting, two of those shots falling from downtown.

Perhaps Dawes’ second biggest shot of the game came at the 13-minute mark in the second half. With Clemson trailing by a point, the gritty guard threw up a shot from behind the three point line, splashing his second trey of the game and energizing the Littlejohn crowd as the Tigers retook the lead.

“It's always a big factor to have that crowd every time you walk into a home game. That’s what you want to play for." said Dawes after the Tigers 70-69 win over the No. 6 ranked Florida State Seminoles.”

Clemson will take part in its final road contest of the regular season on Wednesday, March 4. The Tigers are set to head to Blacksburg, Va., for a matchup against Virginia Tech (15-13, 6-11). Wednesday’s game at Cassell Coliseum will tip off at 7 p.m. and air on ACC Network.

📝 Yesterday was our third win over a Top-6 team this season. The first team to do it since the 1979-80 Tiger team.

But, we've never beaten three teams ranked in the AP Top-6 in the same season…. until yesterday 😏#ClemsonGRIT pic.twitter.com/BtlAgfJP1B

📝 Down 42-32 in the second half, it marked the fifth time this season we've overcome a double-digit deficit to claim victory.#ClemsonGRIT pic.twitter.com/R2ggeYWpNh

The Tigers pick up their 3rd Top 10 win of the season with the W against Florida State. pic.twitter.com/Hr9Z7CvYO3

🐅 WHAT A FINISH IN LITTLEJOHN COLISEUM 🐅 pic.twitter.com/7E39AkOu6f

Another amazing win for @ClemsonMBB over a Top 10 team! Thank you to the fans for keeping LJC loud! #ClemsonGRIT #GoTigers pic.twitter.com/BWiLAmzeKm

Clemson completes the upset with a game-winning bucket with 1 second left! 👀

Another outstanding day in Littlejohn! Congratulations to our student-athletes and coaches on another gritty win over a top-ten team !! https://t.co/n6ZpFNHkrK

"Al was terrific… We just decided to let him go and see what happened." – Brad Brownell pic.twitter.com/tq9FpIyQYX

CLEMSON TAKES DOWN No. 6 FLORIDA STATE! 🚨

Al-Amir Dawes hits the game-winning shot with 1 second left to lift the Tigers to the win! pic.twitter.com/8jZLIBSBpH