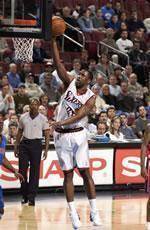 DALLAS – Former Clemson basketball great Greg Buckner was signed by the NBA’s Western Conference Champion Dallas Mavericks, the team announced late Thursday afternoon. Buckner, who was originally drafted by the Mavericks in 1998, returns after spending the past two seasons with the Denver Nuggets. Terms of the deal were not disclosed.

Buckner completed his seventh NBA season in 2005-06 and averaged a career-best 6.7 points per game. He shot 78.2 percent from the free throw line and made a career-high 86 three-point baskets. For his two years with the Nuggets, Buckner made 135 of 364 three-point attempts. Known for his great defense, he also set a career-high with 87 steals in 2005-06.

Buckner is a veteran of 400 career games in his seven years in the league. He has averaged 5.7 points and 3.1 rebounds per game during that time, and is a career 74.7 percent free throw shooter.

The Hopkinsville, KY native started all 122 games during the four years he spent at Clemson (1994-98). He was a two-time All-ACC (second-team) player and the ACC’s Rookie of the Year in 1994-95. Buckner led the Tigers to three consecutive NCAA Tournament appearances (1996-98) and finished his career ranked fourth in school history with 1,754 points scored.