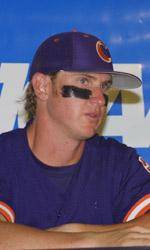 Clemson, SC – Khalil Greene was named one of three finalists for the Rotary Smith Award Thursday. Greene, who has already been named National Player-of-the-Year by Collegiate Baseball, is hitting .482 with 24 homers and 79 RBIs this season. The senior shortstop is also riding a 30-game hitting streak into Super Regional action this weekend against #18 Arkansas. Greene, who has set numerous single-season and career Tiger records, is second in NCAA history in both career hits (392) and doubles (91). The Key West, FL native was also the 13th overall pick of the San Diego Padres Tuesday in the Major League Draft.

The 15th-annual award is given each summer to the nation’s top college baseball player. The award, a national project of the Rotary Club of Houston, raises money for Rotary charities, Texas Children’s Hospital, and the Karl Young League. Among the past winners include Southern California’s Mark Prior in 2001 and Clemson’s Kris Benson in 1996. No school has ever had two players win the award.

Greene joins pitcher Justin Simmons of Texas and Houston pitcher Brad Sullivan as finalists. The winner of the award will be announced at the conclusion of the gala Rotary Smith Dinner at the Hotel Inter-Continental in Houston, TX on June 24. Former Detroit Tiger manager Phil Garner will be the featured speaker at the annual gala, while Hall of Fame broadcaster Milo Hamilton will once again handle M.C. duties. The three finalists were selected in a national vote of college baseball publicists. Voting to determine the winner of the award will begin on Monday, June 10 and run through June 21.