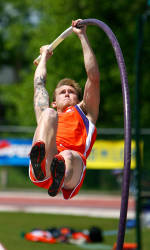 Greeley Named to U.S. Roster for NACAC Under-23 Championships

Clemson, SC – Departed senior track & field athlete Mitch Greeley has been named to the Team USA roster for the 2008 NACAC Under-23 Championships, held July 18-20 in Toluca, Mexico. Greeley will be one of two pole vaulters, along with Jordan Scott of Kansas, representing the United States this weekend.

The NACAC Athletic Association’s Under-23 Championships are held every two years in one of the 32 member nations of the North America, Central America and Caribbean Athletic Association, one of six regional athletics associations affiliated with the International Association of Athletics Federations (IAAF).

Greeley is coming off a busy senior campaign with the Tiger track & field program. He most recently competed at the U.S. Olympic Trials in Eugene, OR. Greeley earned three All-America honors during his highly decorated vaulting career. He also was a three-time ACC champion and in 2008 earned the individual crown in the pole vault at the East Region Championships.

He is certainly no stranger to international competition. In the summer following his freshman year at Clemson, he earned a silver medal for Team USA at the Pan American Junior Championships, which were held in Canada.