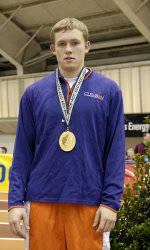 Fayetteville, AR – The Tiger track & field team wrapped up the final day of competition at the Tyson Invitational on Saturday. Mitch Greeley, a junior from Rock Hill, SC, headlined the Tigers’ efforts on the second day of competition. He finished runner-up in the pole vault and improved on his school record in that event.

Greeley cleared 17’8.5″ on his first try, which is the best clearance ever for the 2006 indoor All-American. He tried to clear 18′ for the first time in his career, but was unable to do so with three attempts. Greeley’s mark is a strong NCAA provisional qualifying effort.

Corey Brown won his section of the 200m dash on Saturday. He ran a season-best time of 21.40, which was actually the best time this season by any Tiger sprinter in the 200m. Gwantaveus Anderson (22.32) and Cowin Mills (22.46) also competed in the prelims of the 200m dash for Clemson. Travis Padgett was disqualified due to a lane violation. Brown went on to the finals, finishing sixth with a time of 21.49.

In the 60m consolation final, C.J. Spiller crossed the finish line in sixth place after a time of 6.87 seconds. The 4x400m relay team of Travis Swaggard, Andrew Porter, Cowin Mills, and Corey Brown posted a season-best time of 3:13.49 Saturday. It was the fifth-best time in the collegiate level final.

Bryce Iverson improved on his season-best time in the 3000m after running 8:28.15. He finished in sixth place, while teammate Sam Bryfczynski was ninth with a time of 8:34.46.

Adam Linkenauger competed in the championship high jump on Saturday, just his second meet of the season. He cleared 6’9.75″ and finished in a tie for 10th place.

Matt Feiling posted the best mark of the season for the Tigers in the shot put. He had a toss of 49’7.25″ on Friday. He also placed third in the weight throw Saturday after a toss of 50′ even.

The Tigers return to action in two weeks, playing host to the 2007 ACC Indoor Track & Field Championships for the second time at the school’s impressive indoor facility.