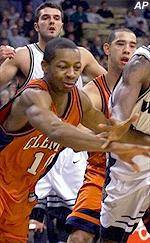 Who is this newcomer to the Clemson men’s basketball team who plays with such courage and determination? Who is this amazing athlete who shows such agility on the court and such modesty away from it?

He is none other than freshman Edward Scott, and he is indeed, by every definition of the word, “great.”

“I think all of us fell in love with Ed Scott immediately,” said Men’s Head Basketball Coach, Larry Shyatt. “What he has given up for this team most young men would never even think of.”

The 6’0″ guard from Eastover, SC began his career at Clemson on the injured list after breaking the fifth metatarsal bone in his left foot during practice on October 27. He has been playing with a pin in his foot ever since his debut with the team in late November against Wisconsin-Green Bay.

According to Shyatt, because of the injury Scott has had to sacrifice the opportunity this season to live up to, or exceed, his potential.

“He has played with a considerable amount of pain every day. He has done it all in the name of team because he knew the team was depleted with injuries,” said Shyatt. “I just cannot say enough about him.”

Scott agrees that the injury has caused him some adversity on the court this year.

“It slows me down a great deal,” said Scott. “It is real tender where the incision is, and I can’t put any pressure on it.”

Scott may be prevented from performing at the level that he would prefer, but it isn’t really showing up in the statistics.

Despite playing in pain, this skillful ball handler has 64 assists and only 51 turnovers for the season. He is averaging seven points per game, has had five games scoring in double figures, and is averaging 32 minutes of playing time per game. Scott is becoming quite the outside shooter as well. He is shooting 33 percent from beyond the arc, and in his last two games against Duke and Georgia Tech he drilled five out of six attempts at three-point baskets.

“He has done an amazing job on the floor for us this year,” said Shyatt. “He has had an excellent assist-turnover ratio. We’ve been a much more successful team with him playing, and far less successful without him.”

Scott’s team at Lower Richland High School was also extremely successful when Scott was on the court. During his senior year, he led the team to the State Championship and a #15 national ranking in the final polls by USA Today. He was an All-State selection and named the South Carolina 4A Player of the Year by the South Carolina Basketball Coaches Association.

Playing for a young Clemson team with a 10-19 overall record this season has likely been similar to wandering through entirely uncharted territory for Scott.

“It has been a real challenge that I have learned a lot from. But I believe that it has brought the team closer together, because we have to cover up for one another when everyone is against us,” said Scott. “The team has really been there for me this year, and I mean everyone.”

Scott will be given a great opportunity to further bond with his teammates this week as the team travels to Charlotte, NC for the ACC Tournament. It will be Scott’s first appearance in the tournament, and quite a challenge for the Tigers as the team is scheduled to take on Duke in the first round.

Shyatt will be looking for continued success from Scott with the assist-turnover ratio during the tournament, but also hopes to see him contribute defensively.

“We will need him on the defensive end,” said Shyatt. “He could become an excellent defender, and we need him to focus on that and improve on that in the tournament.”

For an injured rookie playing on a team that has to face Duke first in the ACC Tournament, one might expect Scott to be feeling anxious, and maybe even a bit overwhelmed.

But anyone who thinks so has completely underestimated Edward Scott.

“I think we can win the ACC,” Scott proclaimed. “In the back of my mind, I still have the dream of winning the ACC.”

This year? Or next year?

With a sly smile, he takes no time to answer.

With that kind of optimism, Duke will need to be on guard this Thursday when they meet up with Clemson’s “great” freshman point guard.