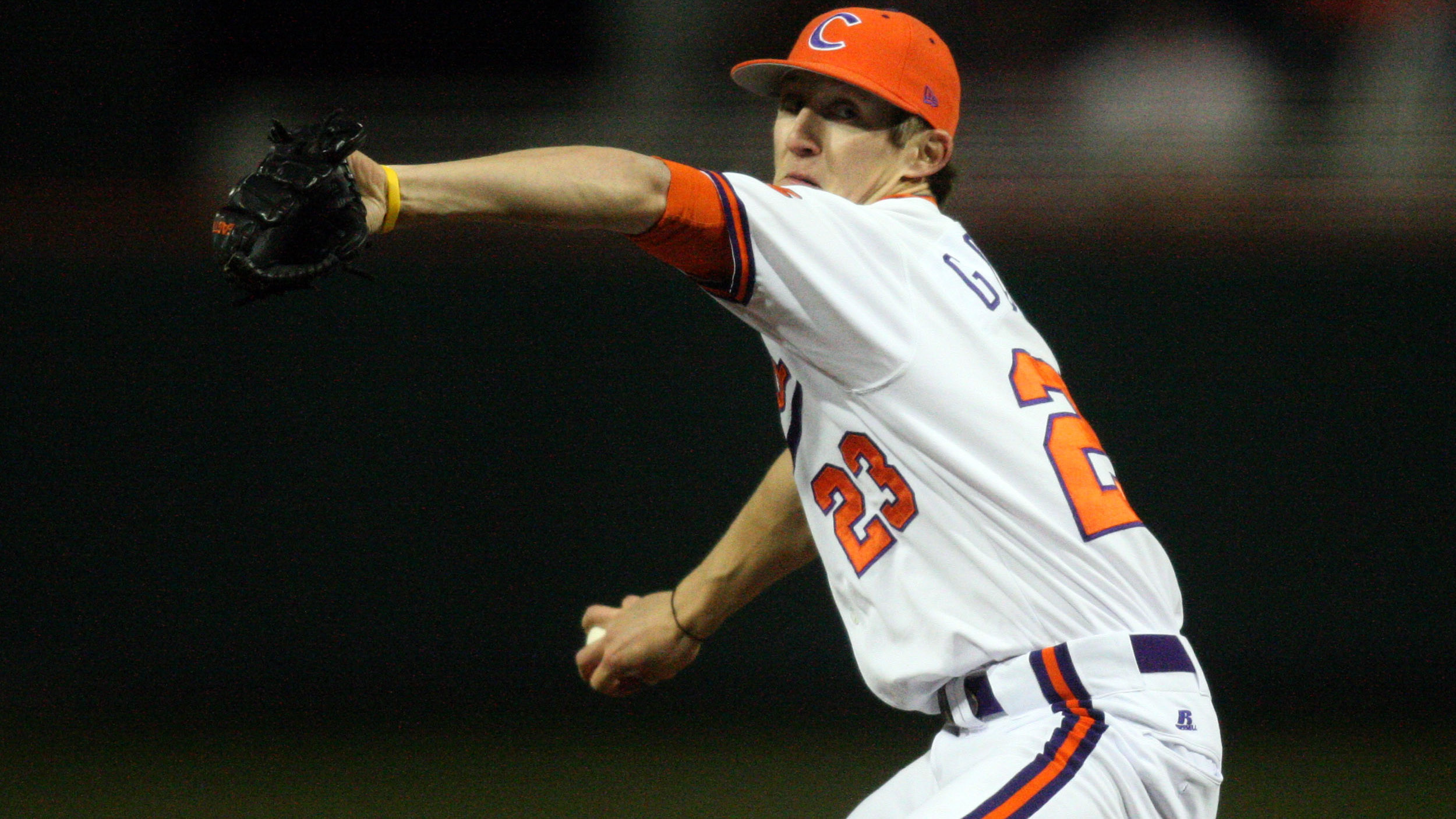 Sophomore righthander Daniel Gossett pitched a five-hit shutout to lead Clemson to a 7-0 victory over Duke at Doug Kingsmore Stadium on Friday afternoon. The Tigers, who took a 1-0 lead in the series, improved to 14-7 overall and 4-3 in the ACC. The Blue Devils fell to 11-11 overall and 2-5 in ACC play.

Gossett (3-1) earned the win by allowing just five hits, no runs, and no walks with three strikeouts in a career-long 9.0 innings pitched. The Lyman, SC native, who retired the first 13 batters of the game, tossed the first shutout by a Tiger since 2008, when Graham Stoneburner blanked N.C. State 2-0 at Doug Kingsmore Stadium on March 23. It was also the first complete game by a Tiger since 2011.

The Tigers took the game’s first lead in the fourth inning. Shane Kennedy led off with a bunt single, then Jon McGibbon belted a single to right field. Rightfielder Jeff Kremer threw Kennedy out at third on the play as McGibbon took second base on the throw. Two batters later with two outs, Thomas Brittle ripped a 1-2 pitch down the right-field line for a single to score McGibbon.

In the fifth inning, Steve Wilkerson hit a two-out double down the left-field line and scored on Garrett Boulware’s single to left field.

The Tigers tacked on three runs on three hits and three Duke errors in the sixth inning. Brittle hit a one-out single down the right-field line and advanced to second on Kremer’s error on the play. Tyler Slaton reached on an infield single to advance Brittle to third, then Jay Baum hit a chopper to third-baseman Jordan Betts. Betts booted the grounder as Brittle scored, then Betts’ throw to first was errant, allowing Slaton to score. Steven Duggar followed with a single through the right side to score Baum.

Betts led off the top of the eighth inning with a double to left field, then Matt Berezo reached on a bunt single. Both runners moved up a base on Mark Lumpa’s sacrifice bunt, then Ryan Munger flied out to shallow center for out #2. Kenny Koplove lined an 0-2 pitch headed for centerfield, but Gossett snagged the liner for the inning-ending out.

Brittle led off the bottom of the eighth inning with a single to left-center and stole second. Two batters later, Baum reached with one out on an error by Koplove at short, then pinch-hitter Mike Triller lofted a sacrifice fly to left field to score Brittle.

In the ninth inning, Kremer grounded a one-out single through the left side. Later in the inning with two outs, Chris Marconcini hit a high flyball that fell for a double down the left-field line to advance Kremer to third. But Betts flied out to center to end the game.

Clemson pounded out 14 hits in the contest, led by Brittle going 4-for-4 with one RBI, two runs, and two stolen bases. Duggar, Boulware, and McGibbon added two hits apiece.

Betts had two of Duke’s five hits in the game.

Clemson and Duke will conclude the three-game series with a doubleheader on Saturday at 12:30 PM.