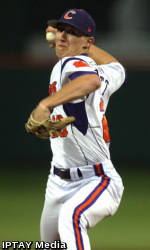 Gossett struck out 15 batters against no walks in 9.0 scoreless innings pitched over two appearances (one start) last week. He also allowed just five hits (.156 opponents’ batting average) and played a hand in two victories. Against Winthrop on Tuesday, he struck out 13 batters while allowing just three hits (all singles), no runs, and no walks in 7.0 innings pitched to earn the win. The 13 strikeouts were the most by a Tiger since 2009. He also retired the first 15 batters of the game against the Eagles. Then at Duke on Sunday, he tossed 2.0 scoreless innings with two strikeouts to record the save in the Tigers’ 4-2 victory. On the season, he is 3-2 with two saves, a 4.66 ERA, and 37 strikeouts against 10 walks in 29.0 innings pitched over 10 appearances (four starts).