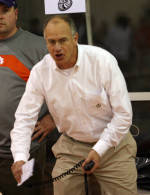 Clemson, SC – Gordon Thomson, an assistant coach with the women’s track & field team, has been named to the staff for the United States men’s team that will compete at the 2007 Pan American Junior Championships. The event will be held July 6-8 in Sao Paulo, Brazil.

“Gordon is a great coach,” said Marcia Noad of Thomson’s selection to the staff. “USA Track & Field recognizes that and we definitely recognize that at Clemson. It is an honor and a privilege to be selected as a USA team coach. Gordon will represent the USA well this summer just as he has represented our program well since his arrival last summer.”

The men’s team will be under the direction of Head Coach Jack Hazen, who is the cross country coach at Malone College in Ohio. Athletes competing for the U.S. at the meet qualify for the roster via finishes at the USA Junior Championships from June 20-24.

Thomson completed his first season as an assistant coach at Clemson in 2006-07. He was in charge of the distance programs, including cross country in the fall.