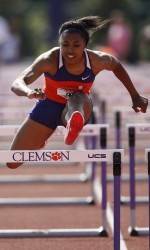 Golladay, Sinkler Combine for Three Medals at NACAC U23 Championships

CLEMSON, SC – April Sinkler earned a pair of medals and Michaylin Golladay claimed silver in the 100m hurdles to highlight Clemson’s efforts at the NACAC (North American, Central American, Caribbean) U23 Championships. The meet, which featured several under-23 standouts across multiple nations in the Western hemisphere, was held at the Ansin Sports Complex in Miramar, FL.

“I thought our kids did a great job representing Team USA this weekend,” said Lawrence Johnson, Clemson’s Director of Track & Field. “It was a great opportunity for both of them to gain experience against international competition. Both student-athletes have bright futures, and competing in this kind of meet can only benefit them as they progress with their careers.”

Sinkler nabbed the silver in the high jump late Saturday afternoon. She cleared five successive heights on her first attempt, including a mark of 5’11.25″. However, she missed on three tries at 6’0″ while U.S. teammate Amber Kaufman went over the bar on her second attempt.

The Stafford, VA native followed suit with a bronze medal performance in the long jump on Sunday. She hit a high mark of 20’9.25″ against a fairly stiff wind, as she was the top finisher of the two American entries. Sinkler just missed out on a medal performance in three events, as she placed fourth in the triple jump despite a great series. She jumped 42’10.75″ on two of her attempts and performed well in her first international event against a quality field.

Golladay’s runner-up finish was done in impressive fashion. The Upper Marlboro, MD and May graduate matched her personal best with a time of 13.07 in the finals, finishing behind only T’ierra Brown of Miami. It served as a bit of a foreshadowing for the 2011 outdoor season, as the two are expected to be the top hurdlers in the Atlantic Coast Conference with the graduation of Virginia Tech’s Kristi Castlin and Queen Harrison.