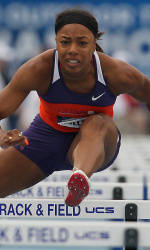 DES MOINES, IA – Michaylin Golladay and Alyssa Kulik qualified for running finals at the NCAA Outdoor Championships on Thursday, but action from Drake Stadium was suspended late in the evening due to multiple thunderstorms and rain showers. Miller Moss leads the decathlon through eight events, and he will resume competition in the javelin throw portion on Friday. The updated schedule will be announced at 9:00 AM on Friday.

Golladay advanced to the women’s 100 hurdles final. She posted a time of 13.01 and won the third semifinal. She will compete Saturday on CBS live at 2:09 PM Eastern time. Bridgette Owens (13.21) ran well as a freshman, finishing 12th out of 24 competitors in her first trip to an NCAA national meet.

Kulik moved on to Saturday’s final in the women’s 3000 steeplechase. She sat in second most of the race behind 2010 NCAA runner-up Emma Coburn (Colorado) and crossed the finish line with a time of 10:03.23, consistent with her efforts from this season. She is the first female in Clemson history to compete in the steeplechase final. She will run Saturday at 1:54 PM, an event that will also be shown live by CBS.

Moss, whose start in the decathlon was delayed for rain, came out strong in the 100 hurdles. He clocked a time of 14.10 despite a wet track and slight headwind. Unlike last season, when he fouled on three attempts in the discus to all but take him out of the competition, Moss hit a mark of 128’2″ on his second throw Thursday. He cleared 16’0.75″, an outdoor season-best, in the pole vault. Moss recorded a throw of 163’5″ on his first attempt in the javelin, the ninth overall event. He will finish out two throws in that event, before concluding the decathlon with the 1500-meter run.

Liane Weber is fourth in the heptathlon standings after the first day of events. She will finish the heptathlon out on Friday, beginning with the long jump at 5:00 PM. Weber amassed 3,420 points on the first day, which included personal bests in two of the four events.

Weber wasted no time in showing her competitive spirit. A personal best time of 13.85 in the 100 hurdles, the opening event, prompted the slightest of fist pumps from the Tiger senior. She followed with a solid 5’6.5″ clearance in the high jump. Weber was atop the entire field in the shot put, as she turned in a personal best mark of 43’4.25″. She ran 25.55 into a stiff wind to win her heat of the 200 dash to finish out day one.

Spencer Adams competed in the men’s 110 high hurdles on Thursday, but did not earn a spot in Saturday’s final. He posted a time of 13.62, the 10th-best time overall. Adams has qualified for the USA Outdoor Championships in Eugene, OR in two weeks.

April Sinkler finished 15th in the high jump. She cleared 5’9.25″ on her first try, but missed three opportunities at 5’10.75″. Sinkler has one more event this week, the triple jump at 6:35 PM Friday. She will be joined in that event by teammate Patricia Mamona, the defending NCAA champion.