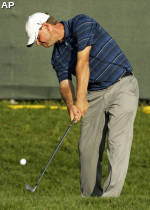 Glover Leads After First Round of PGA Grand Slam of Golf

Clemson, SC – Former Clemson All-American and 2009 United States Open Champion Lucas Glover fired a six under par 65 to take the first round lead at the PGA Grand Slam of Golf at the Port Royal Golf Club in Bermuda. The tournament is comprised of the four Major Champions from the 2009 golf season.

Glover has a two-shot lead over former Georgia Tech All-American Stewart Cink, who won the 2009 British Open in July. Masters champion Angel Cabrera had a one under par 70 to stand in third place, while PGA Champion Y.E. Yang is in fourth place at 71.

The two day event concludes with 18 holes on Wednesday. The winner receives $500,000.

Glover had a strong day as he rolled in a 60-foot birdie putt on the fourth hole and made a 30-footer for an eagle on the par five 17th hole. He had six birdies, an eagle and two bogeys. “I played well,” said Glover. “I didn’t know what to expect. I didn’t hole much at the President’s Cup so I was pretty excited to see some go in today.”