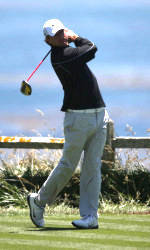 CLEMSON, SC – Former Clemson All-American Lucas Glover will begin play in the 2010 British Open at the famed St. Andrews Course in Scotland on Thursday. It will be the fourth career appearance for Glover in the British Open, but his first at St. Andrews.

Glover will be paired with Rory McIlroy and Tim Clark in a group that begins play at 8:20 AM local time.

Glover has made the cut in three consecutive majors dating to last year’s PGA Championship when he finished fifth, and has made the cut in four of his last five. That streak dates to the 2009 United States Open when he became the first former Clemson golfer to win a major.

By virtue of his victory at the US Open, Glover is exempt for the British Open for five years.

So far this year, the Clemson graduate who was a three-time All-American with the Tigers between 1998-01 has made the cut in 12 of 16 events. He has six top 25 finishes, including a third place finish at the Players Championship in Jacksonville, the highest finish in history by a former Tiger at that event.