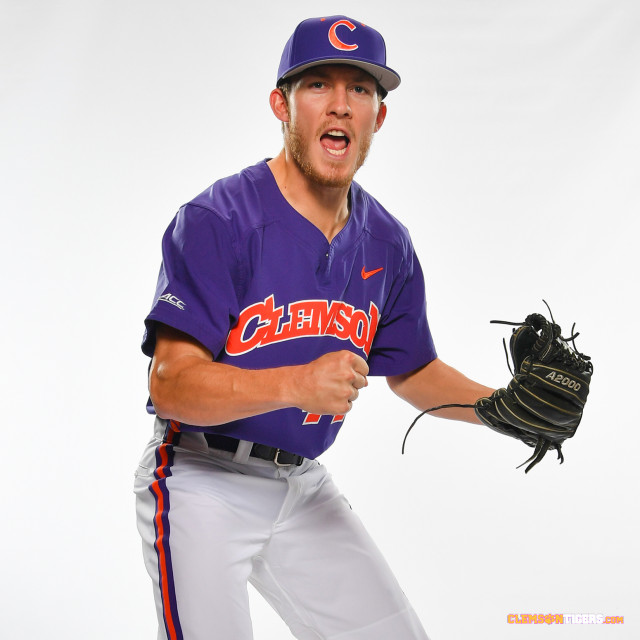 CLEMSON, S.C. – Junior righthander Ryley Gilliam was named a strength & conditioning All-American by the National Strength & Conditioning Association (NCSA). Gilliam is the first Tiger baseball player on record so honored by the organization.

Gilliam has been Clemson’s closer all season and is among the best in the nation in that role. In 2018, he is 2-2 with an ACC-tying-high 11 saves, an 0.79 ERA, a .147 opponents’ batting average and 50 strikeouts in 34.1 innings pitched over 23 relief appearances. His 11 saves are tied for third most in Tiger history.

“Ryley Gilliam has consistently dedicated himself to his physical preparation since arriving at Clemson as a freshman two years ago,” said baseball strength & conditioning coach Rick Franzblau. “He attacks every workout, warmup and conditioning session with the same intensity and focus that he has on the mound closing out games for the Tigers.

“Ryley is without a doubt one of the strongest athletes on the team, demonstrated by his 530-pound trap-bar deadlift and 450-pound back squat. His 35” vertical is also among the best marks on the team.

“Ryley’s weightroom prowess has translated to the mound, where he represented Team USA last summer. He has also been instrumental in getting his teammates to buy into prioritizing their nutrition and sleep. Despite his small frame, Ryley has become a dominant power pitcher, largely due to his dedication to strength and conditioning.”