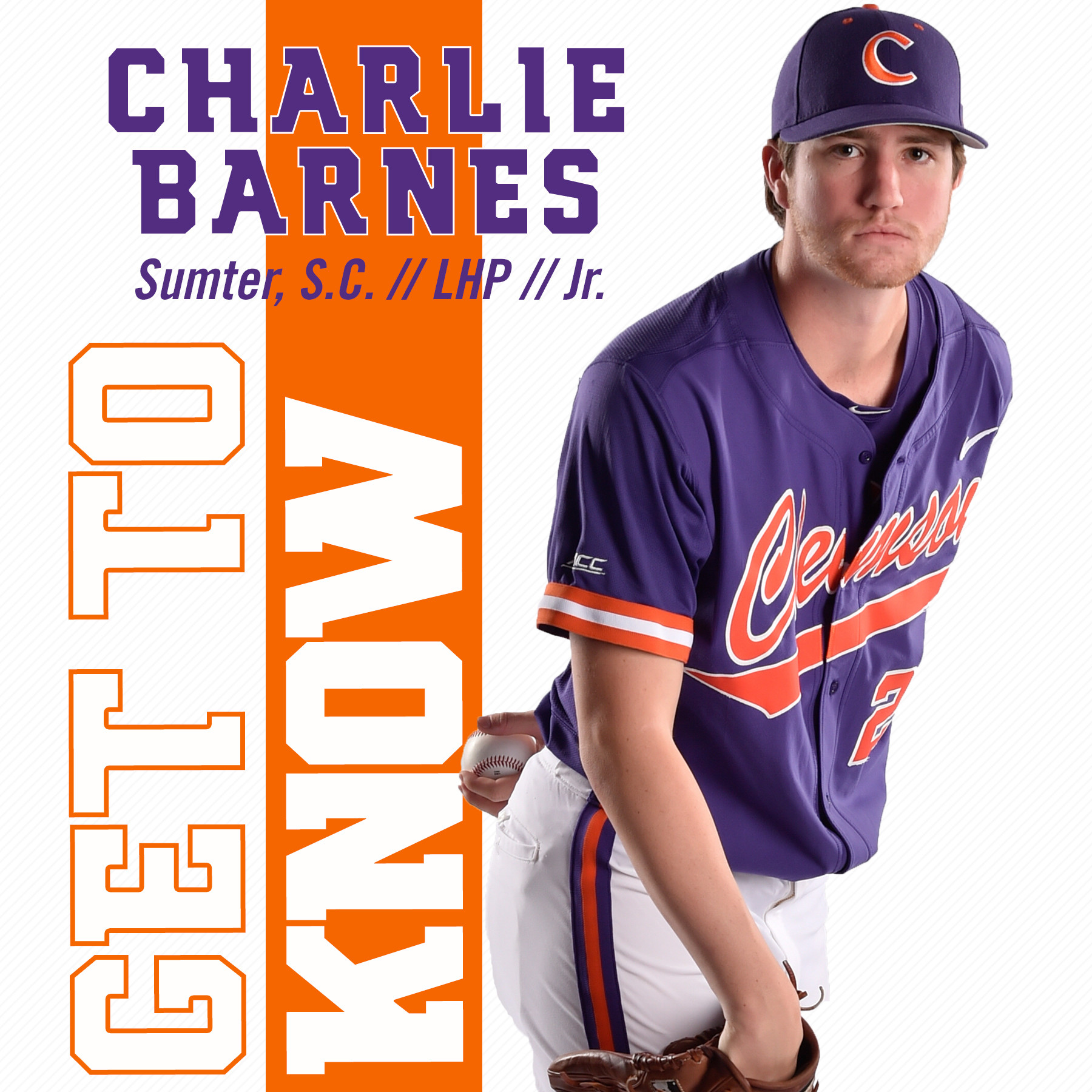 Get To Know Charlie Barnes

Charlie Barnes attended his first Clemson football game when he was six weeks old, so when it came time for him to commit to a college, the choice was a no-brainer.

And in May, he will graduate a year early and become the 13th member of his family to earn a Clemson degree.

“That was one of my things coming in,” continued #23. “Everyone has a goal to stay for three years and then get drafted, and that was my ultimate goal, but I also wanted to get a degree. I took summer school so I would be ahead. There aren’t many athletes who graduate in three years, and it’s something I’ve put in a lot of work for, and it’s cool to see that it’s coming to an end…which is sad, but also exciting.”

On the field, Barnes has grown into a reliable pitcher for the Tigers, fully embracing the role of a weekend starter last season despite never filling those shoes before opening day of 2016. He led the team in innings pitched (94.2) and strikeouts (84) during the 2016 campaign, and he believes that having the opportunity to throw as many innings as he did allowed him not only to grow as a pitcher, but also as a leader.

“Starting every weekend last year wasn’t exactly like my freshman year, but it also was in that I had never made a weekend start until last year, so I had some growing pains. I had the ups and downs, but I finished the year on a strong note. The best part was gaining the experience. I threw as many innings as I could, and the best part about that is I can help guys who are coming in now…especially between me, Pat Krall and Alex Eubanks…we can help the younger guys.

“Last year, we didn’t really have anyone who had thrown a ton to be the leader. So the biggest way that I grew was in a leadership standpoint, where I can go talk to freshmen or meet with guys who haven’t thrown as much and share my experiences with them. I had great starts, I had bad starts…I’ve done it all.”

But Barnes wants to be a role model for more than just his teammates, and it all goes back to the games he came to when he was younger.

“I want people to know that I’m a hard-working guy who just loves what he does,” he expressed. “I love the opportunity to come out and play for a school that I grew up watching, and I just want to be that role model.

“I remember when I was six years old at the games trying to get foul balls, and I want to be that role model who does things the right way, not only on the field, but also in the classroom and the community. That’s the biggest thing…I try to be a role model because I remember looking up to those guys when I was that age.”

The lefthander is looking forward to building off last year’s success, and he anticipates that this year’s team chemistry will make for a fun season for fans and players alike.