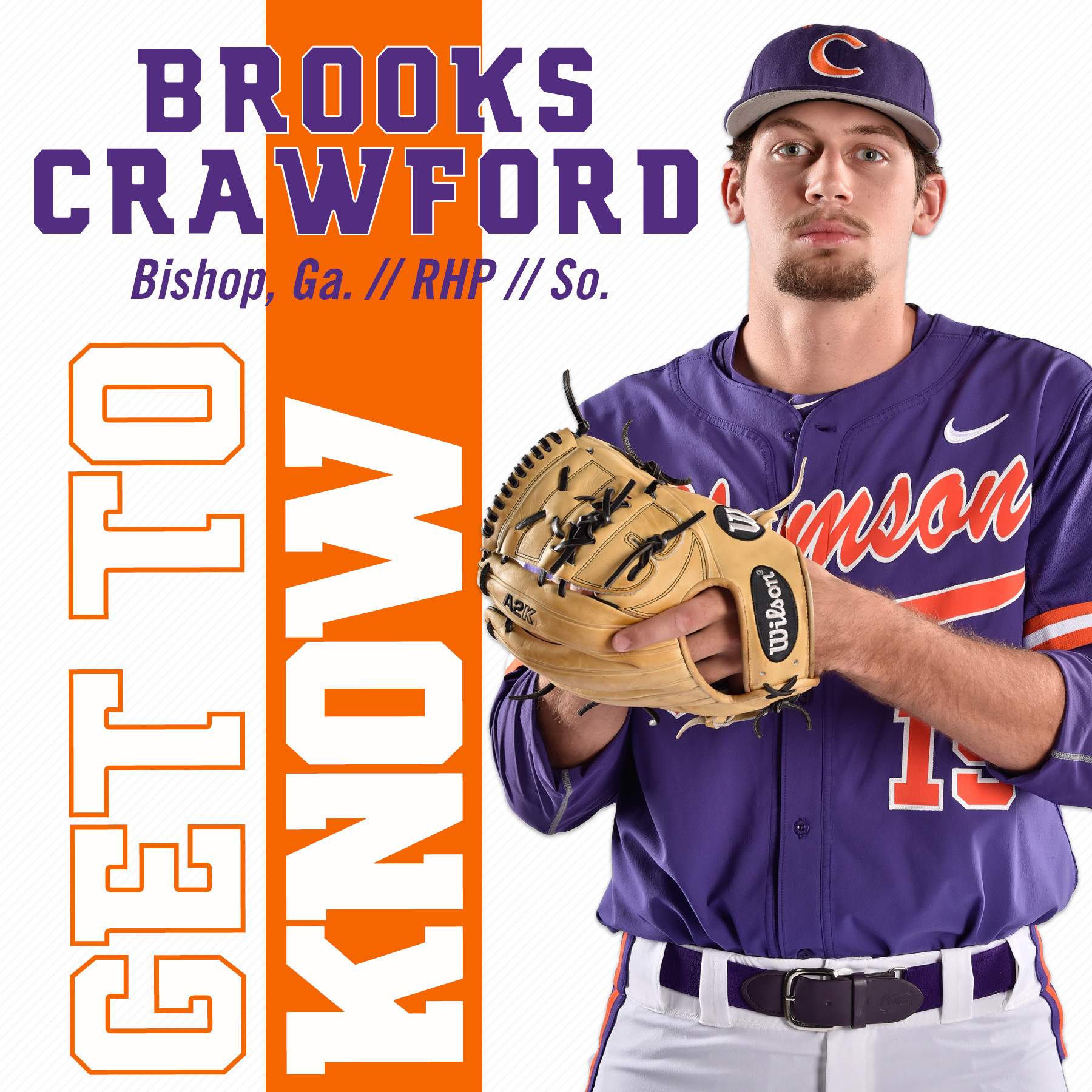 Get To Know Brooks Crawford

Long before he was one of Clemson’s best relievers during his freshman campaign last season, Brooks Crawford was getting into baseball by throwing tomatoes at his house.

“At one of our first houses, we had a garden in the backyard, and I actually used to throw tomatoes at the house, and my dad knew then that I was going to be a baseball player,” said Crawford. “From there, I got into t-ball and it went from there.”

Though he grew up near the University of Georgia, Crawford knew he wanted to come to Clemson since he attended a camp at Doug Kingsmore Stadium when he was 12, and he credited his family for helping him achieve his dream.

“I wouldn’t be here without them,” he said of his parents. “My dad has always been with me every step of the way. In high school, we’d go every day to the hitting facility to throw and hit…everything. We spent hours and hours every day doing that.

“I’m a third generation at my high school. My dad wished he could have had the experience of playing college baseball, but he never got the chance. So he motivated me by hitting home that I only get one shot at it, so I had to do everything I could to make it.”

One of Crawford’s favorite memories from last season was when he was given the opportunity to start the ACC Championship Game on the mound, even though he thought he was not going to pitch at all during the week. And despite a rain delay that would have knocked many pitchers out of the game, Crawford was adamant that he stay in as long as he could, and he provided valuable innings in tough pitching conditions to help deliver the Tigers’ 15th ACC title.

This year, Crawford hopes the Tigers can repeat on the ACC level, but he also has a higher goal after watching an old friend’s special run in Omaha.

“Team-wise, I want for this team to win another ACC championship, but also make it to Omaha,” said #19 of his goals for this season. “This year, we have a really good shot to do what Coastal Carolina did. One of my buddies from high school, Bobby Holmes, plays there. I was really happy for him. During his senior year of high school, he actually said he was going to win the College World Series. So I guess he knew right off the bat.

“It gave me chills for him. What he did…it makes me think that we could do the same thing here. We have a better team this year, and I believe we can compete with anyone.”

Crawford believes that the level of competition the Tigers bring to the field this season is precisely why fans should be excited about 2017.

“I think fans should come out because we have a fun atmosphere. Our team loves to cut up some, and they can see that we enjoy being out there. We enjoy competing every day. Our hard work should bring people out here. We’ve gone through a lot during the fall, so people should look forward to seeing all of our hard work paying off. They should definitely be excited about this year.”