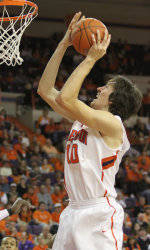 Gamecocks Rally to Down Tigers, 58-55

CLEMSON, SC – Despite holding South Carolina to 37.5 percent shooting in the second half, including a 20 percent clip from three-point range, Clemson was unable to hold off a Gamecock rally as South Carolina defeated the Tigers 58-55 at Littlejohn Coliseum Sunday afternoon. The Tigers fell to 4-3 overall, while the Gamecocks improved to 3-5 with the win.

Clemson guard Andre Young said the primary culprit for the Tigers’ loss had to do with their inability to make shots down the stretch. The Tigers made only two field goals in the last 10 minutes of the game.

“We could not find our stroke,” Young said. “I can’t speak for everyone, but for myself, a lot of my shots looked good and felt good, but they would go in and out or hit off the back of the rim.

“There are going to be nights like that, but we just have to find other ways to score. We need to get to the free throw line. We need to finish in the paint.”

The Tigers connected on 7-of-24 shots in the second half, after hitting on 12-of-26 in the first half. The biggest difference came from behind the arc, as Clemson went 0-for-7 in the second half after making five trifectas in the opening half.

“I thought we played really well in the first half,” Clemson Head Coach Brownell said. “We executed and made shots. We had a working margin. In the second half both teams were just grinding it out. Baskets were hard to come by and that was really the difference.

“We had some open threes. My shooters that normally make them for us did not make them. Then we had some plays in the paint and a chance to make baskets around the rim, but a couple of them got blocked and a couple of them we missed. Then there were a couple we hurried.”

After a slow start by both teams, Clemson started a mini run which was led by back-to-back baskets by Catalin Baciu, who scored a career-high 10 points on 4-for-4 shooting. He later made another basket to give the Tigers a 30-25 lead with 2:54 to play in the first half.

Clemson led by as many as 10 points in the opening half, but South Carolina’s Bruce Ellington nailed a three-pointer from the top of the key just before the break with 1.9 seconds to go to pull the Gamecocks within seven, 35-28, at the break.

South Carolina slowly chipped away at the lead and eventually tied the game at 47-47 on a Damontre Harris putback. Harris and Anthony Gill led the Gamecocks with 10 points apiece, while Ellington finished with nine.

“That was a tough one to lose,” Young said. “We led pretty much the whole game and then we just let up. We let that one slip away.”

The loss was very similar to last year’s matchup in Columbia, SC when a late second-half slump cost the Tigers that night, too.

With the game tied at 49-49, Gill drained a three from the wing that put the Gamecocks up for good.

The Tigers had chances in the final seconds thanks to a Tanner Smith, but USC’s ability to make free throws down the stretch did the Tigers in.

Trailing 58-55, Smith had an opportunity to tie the game with 7.5 seconds to play after being fouled behind the three-point line by Gill. Smith made the first foul shot, but missed the second one. That was the only free throw Smith missed in seven attempts. He led the Tigers with 12 points and five assists, to go along with six rebounds. Devin Booker had six points and nine rebounds.

Clemson will take the next five days off before flying to Tucson, AZ for a non-conference matchup against the University of Arizona next Saturday at 4:00 PM Eastern time. The game will be nationally televised by Fox Sports Net.