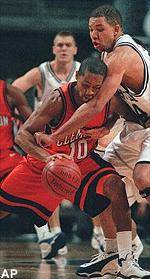 Clemson Most Valuable Player Freshman guard Ed Scott’s presence on the floor proved to be important for Clemson as the Tigers defeated #21 NC State…Scott came off the bench to play 34 minutes and score 10 points…Scott’s ball handling enabled Clemson to break the NC State pressure in the back court…the Tigers did not commit a turnover all night in their efforts to bring the ball past half court…Scott finished the contest with five assists and two steals.

NC State’s Justin Gainey Shutout NC State senior guard Justin Gainey was shutout on Thursday night…Gainey also had no assists and three turnovers…the irony of this is Gainey had what some might call a “perfect game” in his last outing against Clemson…in NC State’s 84-71 win over Clemson on February 6, 1999 in Raleigh, Gainey finished the game 7-7 from the field, 4-4 on 3s and 10-10 from the free throw line on the way to a 28-point scoring performance.

Jurkunas Posts Back-To-Back Double Figure Scoring Games This is the first time this season that Andrius Jurkunas has had back-to-back double figure scoring games…Jurkunas scored 16 points at Maryland and 10 points against NC State.

Key Stat of the Game This was the first game in 2000 that Clemson did not have more turnovers than assists…the Tigers finished the game with 15 assists and 15 turnovers…NC State struggled in that area with only five assists and 19 turnovers.

With Win Clemson Avoids Winless January Clemson avoided its first winless January since the 1954-55 season with the win over the Wolfpack.

Clemson Keeps Streak Alive With Win Over Ranked Opponent With the win over #21 NC State, Clemson has now beaten a ranked team every year since 1985-86…the Tigers have a streak of 14 consecutive years of beating at least one ranked team.

Tigers Win Despite First Half Scoring Drought At one point in the first half, Clemson went eight minutes and 34 seconds without scoring…during that stretch the two teams combined went 20 possessions without scoring.