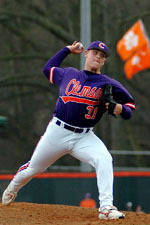 Furman scored four runs in the seventh inning to overcome a 4-1 deficit and held on to defeat #6 Clemson 5-4 Wednesday at Doug Kingsmore Stadium. The Paladins improved to 24-11, and the Tigers fell to 27-12.

Ben Terry, Andrew Greene, and Will Stembridge each had two hits for Furman. Brad Chalk and Taylor Harbin had two hits apiece for Clemson.

Patrick Arnett (2-5) retired the only batter he faced and picked up the win in relief for the Paladins. Nick Holstegge pitched 2.0 innings without allowing a hit or a run to earn his eighth save of the season. Steve Richard (0-1) allowed four runs on five hits in 0.2 innings pitched and suffered the loss for the Tigers.

Singles by Harbin and Adrian Casanova, and a Stan Widmann walk loaded the bases with one out in the second. However, Herman Demmink hit a grounder up the middle and the Paladins turned a 4-6-3 double play to get out of the inning.

Chalk walked to lead off the third, and moved to second with one out when Andy D’Alessio reached on a fielding error by Case Cassedy at first. Travis Storrer followed with a three-run homer to right, his fifth long ball of the season.

Terry walked to lead off the sixth, but was erased on a fielder’s choice bunt groundout by Greene. Greene moved to second on a balk, and scored on a two-out single by A.J. Davidiuk.

Harbin hit a solo home run to left to begin the sixth, his third of the season.

Jackson tripled to center to lead off the seventh, and scored on a single up the middle by Stembridge. Terry hit an infield single with two outs, and Greene followed with another infield single that scored Stembridge. Cassedy then hit a double past D’Alessio at first base that scored Terry and Greene. All five hits in the inning came on either a 2-2 count or 1-2 count.

Adrian Casanova struck out on a bunt attempt with two strikes, and Ben Hall struck out swinging. Chalk walked to load the bases, and Tyler Colvin followed with a lined shot, but first baseman Cassedy did not have to move his feet to snag the line drive.

Tiger starter P.J. Zocchi tied a career high in innings pitched (6.0), and allowed only one run on four hits, and recorded six strikeouts.

Clemson left 11 men on base.

Clemson returns to action Friday at 2:30 PM in Chestnut Hill, MA for its first ever meeting in baseball with Boston College.