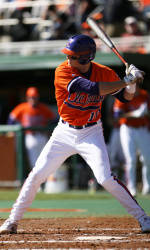 Furman scored two runs in the top of the 14th inning to beat #19 Clemson in front of 3,255 fans at Doug Kingsmore Stadium on Tuesday. Furman improved to 4-2 on the season, while Clemson fell to 4-2. Furman took a 1-0 lead in the season series, with the next game between the teams scheduled for May 6 at Fluor Field in Greenville, SC.

The Tigers had a no-hitter heading into the ninth inning. After retiring the first two batters and with two strikes on the Connor Lind, he hit an infield chopper for the Paladins’ first hit of the game. Brian Harrison then belted the next pitch over the left-field fence to tie the score.

Marc DeDecker (2-0) pitched 1.2 innings of one-hit ball to earn the win for Furman. Kevin Gottlieb pitched a scoreless 14th inning to earn his first save of the year. Tomas Cruz (0-1) pitched 3.1 innings, allowing two runs on one hit with two walks and five strikeouts to suffer the loss.

Mike Freeman led off the bottom of the fourth inning with a walk. Ben Paulsen followed with a single through the right side. Two batters later, Brad Miller fisted a two-out single to center to score Freeman and Paulsen, giving Clemson a 2-0 lead.

Lind broke up the Tigers’ chance for a no-hitter with an infield single with two strikes and two outs in the ninth. Harrison followed on the next pitch with a home run to left field to tie the score 2-2.

Marcus Rose led off the top of the 14th inning with a walk and stole second base. After Lind struck out on a ball in the dirt, Rose broke for third and Tiger catcher Phil Pohl elected to try to retire Rose at third. Rose beat the throw at third and Lind was safe at first. Lind advanced to second on a groundout and Hemingway was intentionally walked to load the bases. Reese Wade drove in the go-ahead run on a fielder’s choice to second base. Miller had a chance to turn the inning-ending double play, but he could not make a successful transfer. Campbell Lewis then gave Furman with a two-run lead on a two-out, run-scoring single through the left side.

Clemson had another chance in the bottom of the 14th. Jeff Schaus walked to lead off the inning and Pohl walked with two outs to put the potential tying run on first base. However, Jason Stolz struck out to end the game and give Furman their first win over Clemson since May 9, 2007.

The Tigers were led at the plate by Paulsen (3-for-6). Furman was led by Lewis (2-for-6). The two teams combined for just 12 hits and used 13 pitchers in the game, including eight by Furman. Neither team committed an error in a combined 122 chances in the game, which was played in chilly conditions.

It was the longest game for Clemson since a 15-inning win versus Wake Forest on April 15, 2000.

Clemson will return to action on Wednesday, as it hosts UNC Asheville at Doug Kingsmore Stadium at 4:00 PM.