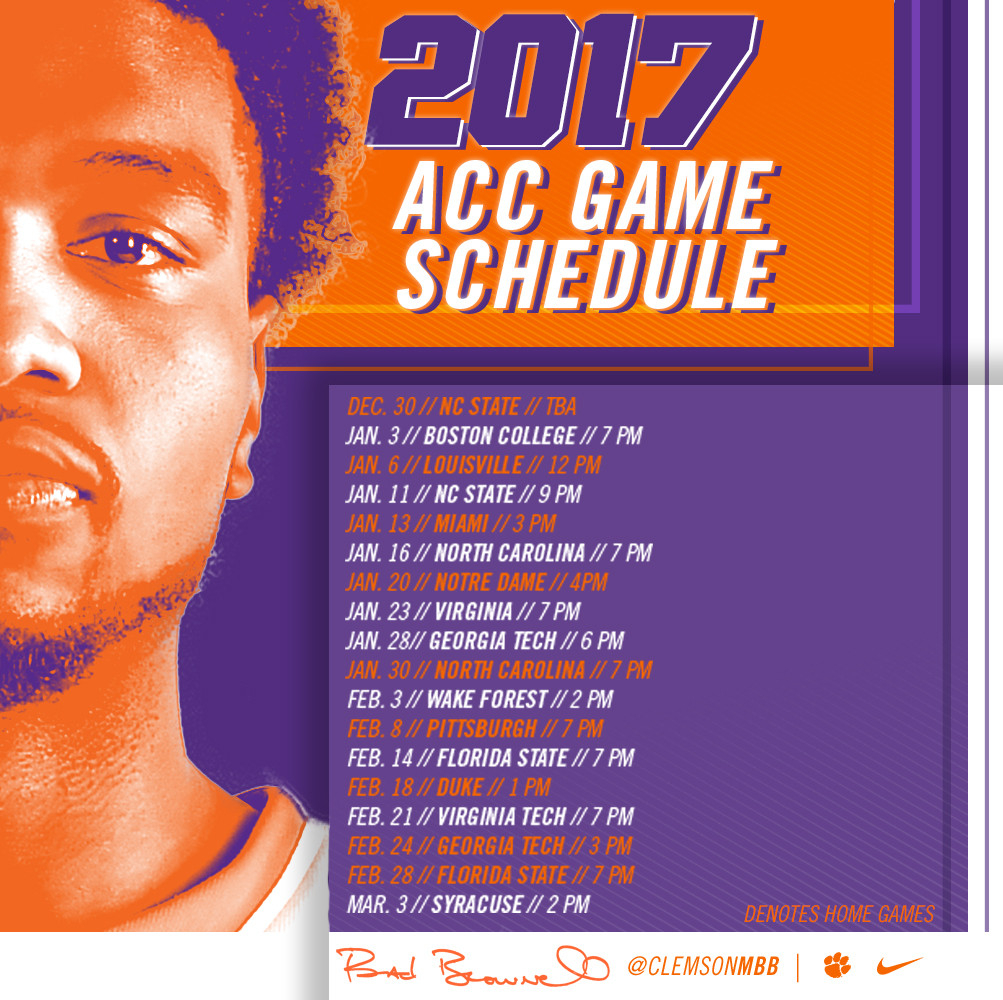 CLEMSON, S.C. –– The complete Clemson University men’s basketball schedule for 2017-18 was announced on Thursday by the Atlantic Coast Conference. Clemson’s home slate is highlighted by six teams that qualified for the NCAA Tournament, including the defending national champion North Carolina Tar Heels. Season tickets are available by calling 1-800-CLEMSON or by visiting ClemsonTigers.com.

The Tigers will appear on ESPN, ESPN2 or ESPNU six times during the course of ACC play, while each game is televised and includes RSN and ACC Network telecasts. The non-conference portion of the schedule was previously released on Aug. 29. Since then, it was announced that the Tigers contest against Florida is set for 4:30 p.m. in the Orange Bowl Classic.

“Once again the ACC has provided our program and our fans with an exciting schedule. We are fortunate to have many home marquee matchups and weekend contests that pairs well with our non-conference schedule,” said head coach Brad Brownell. “Our guys have been working extremely hard in preparation for another exciting season of Clemson basketball.”

Clemson opens ACC regular season play by hosting NC State on Saturday, Dec. 30 and will continually alternate home and road games until Tuesday, Jan. 23 when they play back-to-back road contests at Virginia and Georgia Tech. Included in the early portion of ACC play, the Tigers will host Louisville on Saturday, Jan. 6.

This marks the second time since the 2003-04 season that the Tigers will begin league play as early as Dec. 30.

Two big contests highlight the end of January as Notre Dame treks to Clemson on Saturday, Jan. 20, while the defending NCAA champion Tar Heels will make their way to Littlejohn Coliseum on Tuesday, Jan. 30. The Tigers will be in search of their first win over the Tar Heels since 2010.

The Tigers will have four home games in the month of February, highlighted by a visit from Duke on Sunday, Feb. 18.