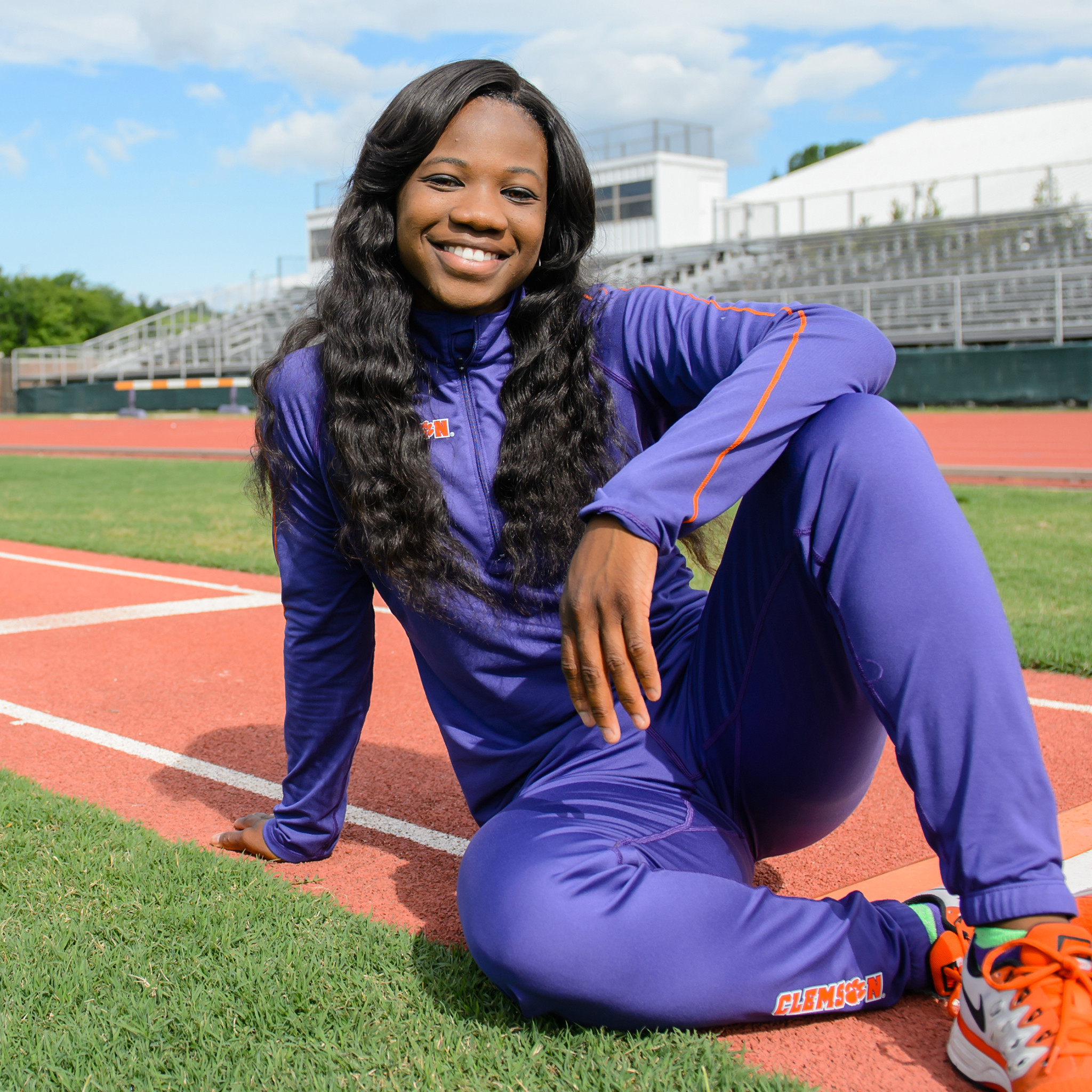 On May 16, 2015, the Clemson women’s track & field program claimed its second-straight ACC title. One student-athlete who elevated her game in the heat of a fight for a conference title was Anasterasia Terrell. She, along with her teammates Iana Amsterdam and Whitney Fountain, had swept the podium in the triple jump to claim 24 of Clemson’s 113.5 points and defeat Florida State on its home turf by 19 in the final standings.

Terrell stood on the podium for the first time in her college career, earning a silver medal with a personal-best leap of 42’7”. Before that, her highest finish in a conference championship was fourth at the 2015 ACC Indoor Championship.

Just over a week later, Terrell wouldn’t even get a jump in at the NCAA East Preliminaries. She fouled on each of her three attempts.

If one of those two meets was going to be a pivotal moment in Terrell’s athletic career, then it would be the ACC Championships. However, there was no better motivator for Terrell than going three-and-out at the NCAA East Preliminaries. It was that failure after the greatest success of her career that would bring out the best in her.

“I was really frustrated after last year,” admitted Terrell. “My mental toughness wasn’t where it needed to be and I knew I was better than that.”

Devastated by defeat, it was Terrell’s faith that provided the reassurance she needed that everything happens for a reason and this was part of God’s plan for her. There was no way she was going to let one meet define her. She knew that wasn’t who she was going to be.

“With my past and everything I’ve been through in my life, I don’t want to have a gift and not do anything with it.”

Terrell grew up in Macon, Ga., without much knowledge of her biological family. She and her seven siblings were split between foster care and adoption. She has never met her father, and at one point in time, her biological mother had the chance to regain custody of her children but chose not to.

She wouldn’t have a stable adult figure in her life until the fifth grade, when she was cut from the basketball team by the same woman, Sherrie Marks, who would eventually become her adopted mother and track coach.

“If I never met her, I wouldn’t be who I am today,” said Terrell. “Before her, I never had a positive influence or anyone I could really trust. She’s always been so supportive of me. I am so grateful and blessed that I have her in my life. She’s my hero.”

As she developed as an athlete, her passion for jumping events grew. Still a very successful sprinter and hurdler at the state level, Terrell’s abilities shined brightest in the triple jump, as she went onto become an All-American her senior year after finishing fourth at the 2013 New Balance Outdoor Nationals.

When it became time for Terrell to begin deciding where she wanted to attend college, Clemson was immediately taken off the table due to the change in coaching staff. She instead had her mind set on another ACC school. However, Marks insisted she visit Clemson and give the new coaching staff a chance.

During her time in Clemson she grew to like the team and she liked the high academic and athletic standards that university possessed, but she remained unconvinced until she had one final conversation with jumps coach Chris Bostwick at the end of her visit. It was that moment she was convinced that Bostwick would care for her in a way that reminded her of her relationship with her adopted mother.

“Something clicked with coach ‘B’,” she said. “Just from our conversation, I could tell he cared about me as a person and an athlete.”

“On the visit, I showed her the progressions of our athletes and told her I think she could be a superstar, and I can help her get there,” said Bostwick. “We had good training partners in place and top-notch facilities, and I think we just connected. She bought into the system and hasn’t wavered since. She called me the day after the visit and said she wanted to be a Clemson Tiger.”

From that point forward, Terrell trained and watched Bostwick’s system work before her very eyes. As she saw improvement in her own abilities, she also witnessed her teammates become All-America jumpers. After coming so close only to fail in the preliminary round as a sophomore, Terrell came back an even stronger competitor as a junior.

“She came back to fall training this year in the best shape of her life and never let off the gas,” explained Bostwick. “I have been fortunate enough to be around some very good athletes, and the recipe is simple…hard work plus sacrifice equals success.

“Not that track wasn’t important to her before this year, but I just saw an entire new drive in her, and it isn’t just on jump days. We always talk about attention to detail, and she has that even if it’s throwing a medicine ball or doing warmup drills. You can’t be a light-switch athlete and expect to turn it on when you want. You have to have that drive all day, every day and any day that ends in ‘y.’ She has showed that the recipe works.”

Indoors, Terrell jumped a personal best 43’0.25” at the Tyson Invitational, placing her fifth all-time in program history. At the 2016 ACC Indoor Championships, she took third place and went on to become a second-team All-American at the NCAA Indoor Championships.

In outdoor competition, she saved her best jump of the year for the ACC Championships, taking the silver medal with a personal-best mark of 43’6.5”, advancing her to fourth all-time in school history. She went on to finish the outdoor season as an honorable mention All-American at the NCAA Championships.

Bostwick and head coach Mark Elliott are not only excited for how Terrell will lead the program as a senior, but also because they know this may have been her breakthrough year, but it certainly won’t be her best year. They are confident Terrell’s senior year will be a special one.

“‘Ana’ has improved every year, and she knows this is her last season as a collegiate athlete, so I’m sure she will come back to campus with great motivation and drive,” stated Bostwick. “My goal for her is to win an ACC individual title en route to helping her team win more team titles. I also look forward to celebrating ‘Ana’ receiving a college degree. She’s a special young lady, and I have no doubt that she will do big things in this world.”

“Our program is fortunate to have talented jumpers like Whitney, Mimi (Land), Iana and now Ana,” said Elliott. “Coach Bostwick does a great job with the talented athletes we have. Our goal is to continue to build on our national level talent.

“Making it to the NCAA meet for ‘Ana’ is a great accomplishment. I knew she would, and she is capable of winning the triple jump. The first step from a national perspective is to be there, and she has done that. Now she has the experience it will take to be a champion.”