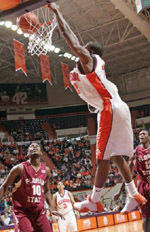 Each edition of COLLEGE HOOPS PREVIEW: 2005 will focus upon one ACC or SEC school and will provide viewers with a review of that school’s ’04-05 season as well as offer insights, analysis and projections for the ’05-06 season. Shot largely on-location at the campus of each ACC and SEC school, the shows will also include profiles and interviews with the head coach and key players; a segment featuring several prominent former college basketball coaches and current telecast analysts; and key team story lines that may unfold during the season.

The COLLEGE HOOPS PREVIEW: 2005 series will be hosted by Sage Steele and Julie Donaldson and will feature reports from FSN South’s ACC ALL ACCESS and SEC-TV reporter Jenn Hildreth. FSN South college basketball analysts Mike Gminski (ACC) and Barry Booker (SEC) will interview coaches and players from each school, and FSN South college basketball analysts and former head coaches Bobby Cremins, Perry Clark and Eddie Fogler will offer their perspective on each team.

“The college basketball season is more than just a sport for millions of passionate fans across the South. It’s a seasonal preoccupation that consumes and dictates their livelihood for five months out of the year,” said Jeff Genthner, FSN South’s vice president and general manager. “This preview series represents FSN South’s commitment to providing the ACC and SEC and their millions of passionate fans with the most comprehensive television coverage available. We’re very excited to preview the coming season with these entertaining and insightful preview shows, and we look forward to the excitement and drama of the 2005-06 basketball season for these two great conferences.”

This season, FSN South will telecast 46 ACC and 54 SEC (including eight games from the SEC Tournament) men’s basketball games. The network also will air 28 regular season ACC women’s games, plus selected games from the postseason tournament, including the championship. FSN South will telecast 26 regular season SEC women’s games, plus 10 matchups from the postseason tournament.