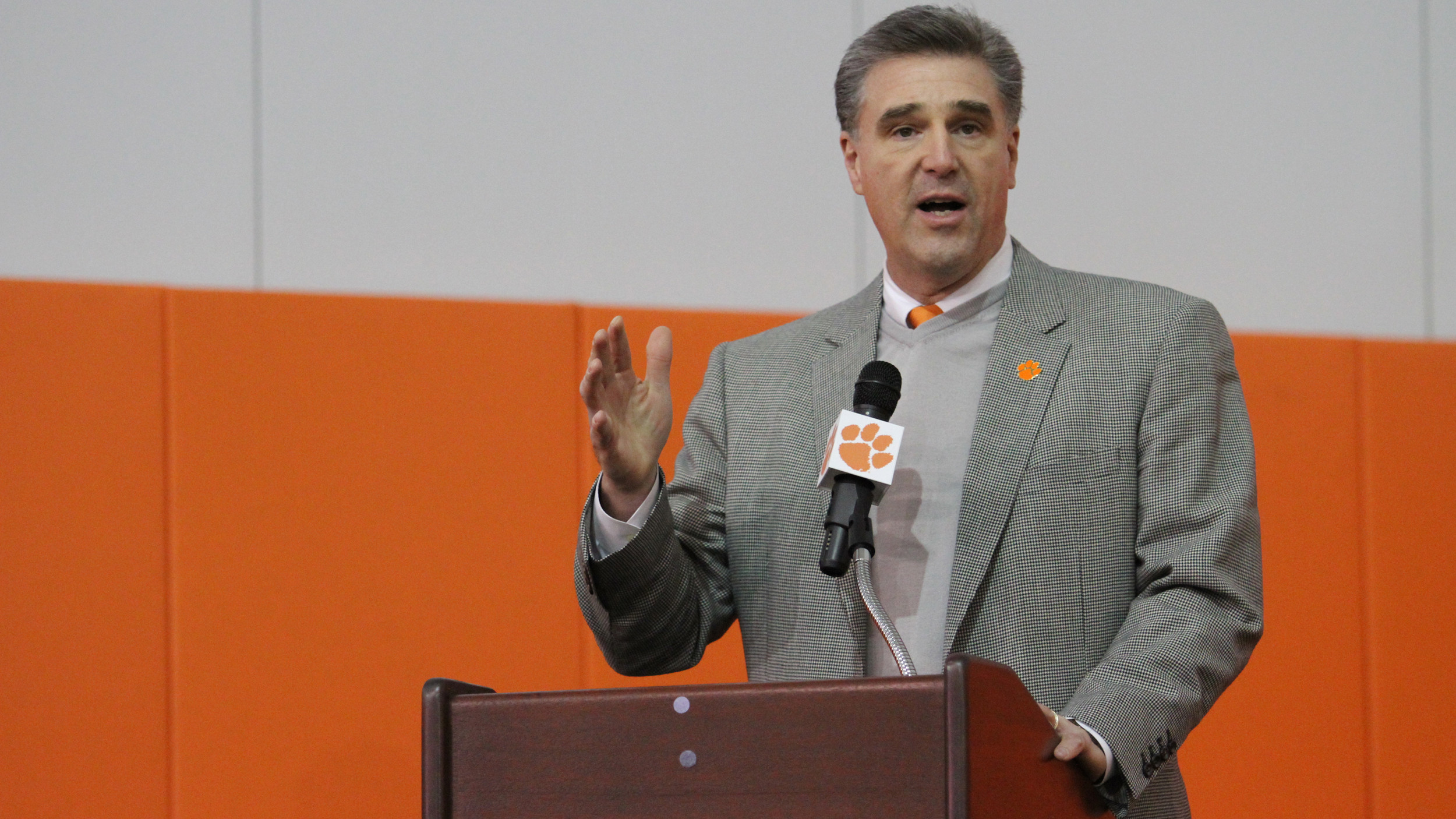 Every one of our student-athletes played the games they love during the month of April, whether it was in-season action or getting ready for the fall semester. Despite the busy slate, two evenings in the middle of the month away from the courts and fields of play highlighted the best parts of working in college athletics.

On April 14, our athletes held the “CLEMMYs,” their annual awards banquet. Along with an opportunity to celebrate the great achievements of the past year, the event provides a great opportunity for a group to get dressed up, walk down the orange carpet and spend quality social time with each other. With the demands of each different program, academic requirement and everything else it takes to be a student-athlete, it’s great for them to spend time away from the competitive world and enjoy the company of peers at such a fun event. Congratulations to all who put on the event and each of the winners (a list is available here).

Two days later, the Student Athlete Advisory Committee hosted a career fair for student-athletes in the WestZone Club. What a great event! More than 60 professionals in fields varying from medicine to broadcasting, came to impart career advice to all junior and senior athletes. The panel discussion focused on networking and using their athletic experiences to help begin life following sports while breakout sessions talked about specific requirements for different fields. It was a tremendous opportunity for everyone there, and I think both the professionals and the student-athletes learned from each other.

CONGRATULATIONS AND ACKNOWLEDGEMENTSOur women’s tennis team put together an outstanding season and closed with back-to-back wins over #1 Duke and #7 North Carolina to claim a share of the regular season ACC Championship. Head coach Nancy Harris was named ACC Coach of the Year, and Yana Koroleva, Beatrice Gumulya and Romy Koelzer each earned All-ACC honors. The NCAA selection show is Tuesday night, and I expect our ladies to host a regional next week. Great job!

The men’s golf team posted a third-place finish at last weekend’s ACC Championships, solidifying their place in the NCAA field. The NCAA tournament begins with regionals on May 15, and the selection show is set to air on the Golf Channel next Monday at 10 a.m.

At the Student Affairs Student Awards Ceremony our Solid Orange Squad and Be a T.I.G.E.R! Character Education programs were honored as the Clemson University Student Organization of the Year by our Vice President for Student Affairs, Gail DiSabatino. I’m immensely proud of the work our student-athletes do in the community and these two programs have done an exemplary job of coordinating service throughout the academic year.

ON THE FIELDS AND COURTSApril might be the busiest month of the athletic calendar, with nearly every sport wrapping up regular seasons or getting ready for the fall. Both tennis and golf programs concluded regular-season action and await NCAA assignments. Track and field, rowing and baseball each progress toward the postseason. Diving finished with some outstanding individual efforts, including Danielle Reitsma’s 12th place finish at NCAA Zones. Men’s and women’s soccer and volleyball each concluded spring slates and have are poised to get the 2014-15 athletic seasons off to a great start.

The annual Orange and White Spring Game drew another record crowd with more than 33,000 in attendance. Coach Swinney has done an outstanding job of representing our program, and the spring game is another example of the constantly expanding interest in our nationally prominent program. The increased attention on the “eighth home game” is a welcome addition to our spring schedule, and we’ll continue to build on the event.

On the basketball front, K.J. McDaniels made the tough decision to head to the NBA. I say tough decision because I know how much K.J. weighed his options and contemplated his decision. He used all the information available to him and made the best decision for him, and for that I applaud him. I know I’ll be rooting for him every time he steps on an NBA court. (If you haven’t seen it yet, check out this great visual essay on K.J.’s outstanding time in a Clemson uniform).

MOVING AHEADWhile our teams and coaches have stayed busy on the fields of competition, our staff has continued to make progress with facilities and planning for the future.

Last week, upgrades to the WestZone locker room and recruiting areas began. This week, we’ll begin a first-ever exterior pressure washing of the entire stadium, so Death Valley will look picture-perfect in the fall. When the baseball season concludes and construction begins on the new baseball complex down the first base line, we’ll begin a continuous phase of construction which will touch every program in our department.

Progress continues on the planning front with the rebuild of Littlejohn Coliseum, and we hope to have an updated timeline in the next few months.

You may have read the Core Campus project no longer includes a new academic center. We added the academic center at a late stage in the planning, and in an effort to not derail the already substantial forward steps of it decided to refocus our efforts on Vickery Hall. There is still a need for an upgraded academic facility, and we’ve begun feasibility studies to determine our course of action.

May is always a bittersweet time of year in college athletics. We say goodbye to many who have represented Clemson throughout their collegiate careers at graduation and close the doors on another athletic year with NCAA championships in various sports. But it’s also an exciting month as we continue Prowl and Growl around the state of South Carolina. We’re always excited to get out on the road and visit so many of you who make the trip to Clemson throughout the year.

We also continue to plan for the 2014-15 season. Your support of our programs make everything possible. Thank you for purchasing tickets, supporting IPTAY and supporting Clemson Athletics.