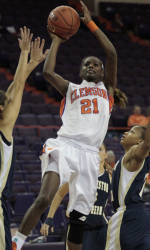 CLEMSON, SC – Clemson hit 11 3-pointers to tie the school mark in a 68-48 win over North Carolina Central on Sunday in Littlejohn Coliseum. Freshman Kelly Gramlich had a career-best 20 points and tied the school record with six made three-pointers, while Nikki Dixon hit four threes on her way to 18 points to pace the Lady Tigers (4-5) in their first all-time meeting with NC Central (2-9).

“I liked how we played today,” said head coach Itoro Coleman. “Our freshmen definitely played well. It was good to see Kelly knock down some shots, because she’s very capable of doing that. We executed a lot better than we’ve been able to in the last three losses.”

It was Clemson’s first game after final exams, and the Lady Tigers showed great energy early on as they played in front of dozens of former players. Clemson held the Lady Tiger Basketball Legacy reunion this weekend, which included a ten-minute scrimmage at halftime of this contest. In all, eight Clemson Athletic Hall-of-Famers attended the event.

“It was great to have many of our former players back to support our team this weekend,” said Coleman, a 2000 Clemson graduate.

Gramlich and Dixon each hit four threes in the first half, and Clemson went on a 15-0 run over a 3:30 stretch early in the first half to turn a 5-2 deficit into a 17-5 lead, during which Dixon hit three of her four threes. The Tigers then had another 11-2 run just before halftime to take a 40-21 lead into the break.

“We had some individual workouts this week, where we had a chance to get a lot of shooting in,” said Coleman. “That was good to see because in practice, they knock them down just like that. It was good to see it in the game.”

Not lost in the offensive firepower was the defensive effort. Clemson held the Eagles to .300 shooting, including .281 in the second half, which was the second-best field goal defense of the season for the Lady Tigers. Clemson also blocked 12 shots, tying for the sixth-best mark in school history.

Lindsey Mason led all players with four blocked shots, while Dixon turned away three of her own. Clemson also outrebounded the Eagles, 51-36, and received a career-best 12 rebounds from sophomore Quinyotta Pettaway, who also added six points and a pair of blocks.

Dixon nabbed five steals for the second straight game, and freshman Chelsea Lindsay was terrific in transition, tallying six assists against no turnovers in 33 minutes of play.

The Lady Tigers led by more than 20 points for the final 9:07 of game time, and stretched the lead to as many as 27 on a Lindsay jumper from the wing.

Clemson returns to play on Thursday at Providence with a noon showdown with the Friars, before taking the Christmas holiday off and playing UAB in the final non-conference game on Dec. 30.

* Clemson played the game in front of more than 30 former players for the Clemson Lady Tigers as part of the Legacy Weekend. 14 alumni participated in a scrimmage during halftime of the game; Eight Hall of Fame members attended the weekend’s festivities.

* Clemson did not commit a foul until the 8:34 mark of the first half.

* The Lady Tigers finished the game with 11 three-pointers made, which ties the school record for three-pointers made in a game. The last time that Clemson accomplished that feat was November 21 of last season when Clemson went 11-for-20 against Kennesaw State at home.

* Clemson recorded 12 blocked shots in today’s game. That is tied for sixth place all-time in school history. Clemson also recorded 12 blocks against DePaul in 1989 and against Ohio in 2009, both of which came on the road.

* The Lady Tigers committed just 17 turnovers in today’s game, the second fewest in a game this season.

* Kelly Gramlich set a new career-high for three-point field goals made in a game with four in the first half of today’s game. She finished the game with a school-record tying six three-pointers made and a career-high 20 points, the first 20+ point game of her career.

* Gramlich’s six three-pointers is also tied with Amy Geren for the Clemson freshman record for three-pointers in a game. On March 18, 1996, Geren made six against Stephen F. Austin.

* Quinyotta Pettaway recorded a career-high 12 rebounds along with six points in today’s game.

* Chelsea Lindsey recorded six assists while turning the ball over zero times in today’s game. That is the best assist to turnover ratio by an individual this season.