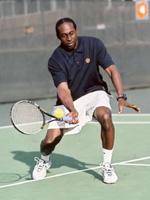 GREENSBORO, NC – Four Tiger men’s tennis players were named members of the All-Atlantic Coast Conference men’s tennis team as announced by the league office on Thursday evening. The 18-member team was selected by a vote of the conference’s nine head coaches. The Tiger honorees include juniors Damiisa Robinson and Sander Koning and Ash Misquith. This is the first time since 1989 that Clemson has had four players earn All-ACC honors.

Robinson won the ACC flight five title after posting a 4-3 mark in the conference at number five singles. The Washington D.C. native has a 24-8 overall record and has tallied a 19-5 mark at number five singles this season. Robinson teamed up with Boetsch to post a 5-1 mark in ACC play at number two doubles. The duo was named to the All-ACC team after winning the league’s flight two doubles title. Robinson was the only player in the league to be named both a flight champion in singles and doubles.

Misquith garnered All-ACC honors after winning the flight six crown. The Halifax, Nova Scotia native posted a perfect 7-0 record in ACC matches at number six singles and has tallied a 17-5 overall record this season. Misquith earned ACC Player of the Week for the week of Apr. 14.

Koning leads the Tigers in singles victories with a 26-8 overall record. The sophomore has posted a 20-6 mark in dual matches and finished conference play with a 7-1 record. The Oosthuitzen, Holland native was named ACC Player of the Week on Jan. 27.