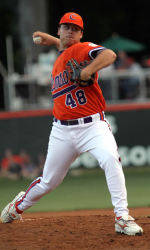 Clemson, SC – Pitcher Josh Cribb and first baseman Andy D’Alessio were both named first-team All-ACC on Monday. The team was compiled after a vote of the league’s 12 head coaches. It is the first selection for both players who have led the third-ranked Tigers to a 43-13 record this year, including 24 wins in 30 league games. Pitcher Jason Berken and outfielder Tyler Colvin were named to the second team.

Cribb has a 9-0 record this season with a 2.62 ERA. He has won 15 of his last 16 decisions over two seasons. The right-hander, who received his undergraduate degree from Clemson on May 12, is one of just five pitchers in Clemson history to post a perfect record with as many as nine decisions in a single season.

The 12-0 perfect record recorded by Chuck Porter in 1976 is attainable with a strong postseason performance by Cribb.

Additionally, Cribb leads the team in strikeouts with 75 and opponents have hit just .215 against him. He is the first Clemson pitcher to earn first-team All-ACC honors since Steve Reba in 2002. Cribb was named first-team All-ACC Tournament last year. D’Alessio is the ACC’s top home run hitter with 20 in his 56 games.

A .324 hitter as Clemson’s starting first baseman in every game this year, D’Alessio also leads the Tiger team in RBIs (71) and slugging percentage (.676). He has a .998 fielding percentage with just one error all season. This marks the fourth time in the last five years Clemson has had the first-team All-ACC first baseman.

Twice this year D’Alessio has been named a national player of the week by Collegiate Baseball and he has been a two-time ACC Player of the Week selection. He is a semifinalist for the Dick Howser Trophy.

Berken has joined Cribb in Clemson’ starting rotation and he has a 9-3 record for his 14 starts. He has 67 strikeouts to rank second on the team in that category. Berken has five of Clemson’s 15 victories in the winning streak to close the season.

Colvin has been Clemson’s hottest hitter to close the season. He was 11 for 13 in the regular season ending Wake Forest three-game series and contributed 14 RBIs. He was named a National Player of the Week by Collegiate Baseball for his performance in that series.

For the year, Colvin is hitting a team best .354 with 12 home runs and a team best 37 extra base hits. He also leads the team in steals with 18.