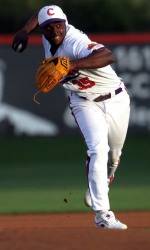 Third-baseman Marquez Smith was named First-Team All-ACC in 2007. Smith, who is hitting .317 with 11 homers and 48 RBIs, was the lone Tiger to make the first team. The team was compiled after a vote of the league’s 12 head coaches. It was the first selection for the senior. Three Tigers made Second-Team All-ACC, including junior outfielder Brad Chalk, junior shortstop Taylor Harbin, and junior starting pitcher Daniel Moskos.

Click on the link below to read the ACC release and view a complete list of the 2007 all-conference baseball team.