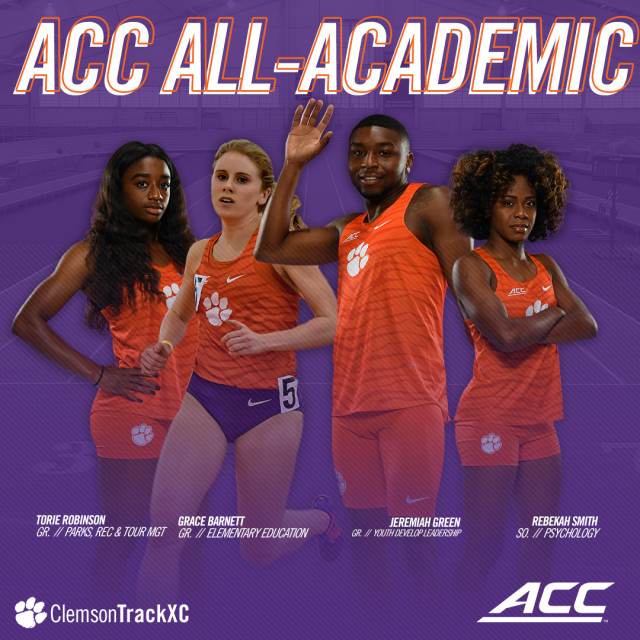 Barnett garners her fourth career (2015-18) indoor All-ACC Academic accolade and 10th overall between cross country (3), indoor (4) and outdoor (3). Barnett, who is also graduate student working towards her master’s in Youth Development Leadership, was a recipient of the ACC’s 2018 Weaver-James-Corrigan Award, which is awarded to select student-athletes who intend to pursue a graduate degree following completion of their undergraduate requirements. Each recipient receives $6,000 toward his or her graduate education having performed with distinction in both the classroom and their respective sport, while demonstrating exemplary conduct in the community. On the track, Barnett placed second at the ACC Championship in the women’s mile and anchored the Tigers’ DMR team, which also set the program record and was the first CU women’s DMR team to ever run under 11:00. The Pawley’s Island, South Carolina, native also represented the Tigers at the 2017 NCAA Indoor Track & Field Championship and garnered Second Team All-American honors in the mile and DMR.

Robinson received her undergraduate degree this past December in Parks, Recreation and Tourism Management. She claims her first career All-ACC Academic honor after running the ACC’s No. 4 time in the 60m dash at Bob Pollock Invitational Jan. 26, which also ties her existing No. 5 program record in the event. Robinson also registered eight points at the ACC championship for her efforts in the 60m and 200m dashes. Her time of 23.56 seconds in the 200m dash at the conference meet was good for No. 4 on the ACC’s season performance list and is tied for ninth in program history.

Smith nabs her second career All-ACC Academic distinction after finishing in third on the ACC’s performance list in both the 60m and 200m dashes. The sophomore was the Tigers’ second-leading scorer at the conference championship meet, tallying 12 points after placing third in both the 60m and 200m dash finals. Her PR of 7.26 seconds in the 60m dash, which she achieved at the Clemson Invitational, ranks fourth in program history, while her PR in the 200m dash (23.30) ranks sixth in CU history.

Green, Barnett, Robinson and Smith all earned All-ACC honors for their performances at the 2018 ACC Indoor Track & Field Championship.