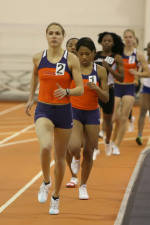 Clemson, South Carolina – A total of four student-athletes from the Clemson track & field program earned official bids to this year’s NCAA Indoor Championships on Monday. The NCAA released the declaration list for the indoor national meet, and the Tigers will be represented by three members of the women’s team and one from the men’s squad.

Leading the way for the Tigers is the nation’s #1 ranked sprinter in the 60m dash, Jacoby Ford. The two-sport athlete clocked an ACC record 6.51 at the league meet two weekends ago, and is hoping to improve on his third-place finish in the event at the 2007 NCAA meet. The 60m prelims are scheduled for 5:45 PM (Central time) Friday, with the final set for 6:10 PM Saturday.

C.J. Spiller was not extended an at-large bid on Monday. Only 14 entries were accepted in the 60m dash, and all 14 athletes earned automatic spots in the field. Spiller ran a 6.65 last weekend at Virginia Tech, just two hundredths shy of an automatic qualifying time.

Patricia Mamona not only earned her third consecutive bid to the NCAA Indoor Championships in the triple jump, but also qualified in the pentathlon. She jumped 43’3″ in earning All-ACC honors in the triple jump on Feb. 28, but her personal indoor best is 43’7″. The triple jump will be held Saturday at 3:30 PM.

Mamona also automatically qualified for the pentathlon after a point total of 4,081, second-best in Clemson history. She ranks #6 nationally heading into this weekend’s meet. The pentathlon will be held Friday, beginning with the 60m hurdles at 10:00 AM.

Liane Weber will be making her second trip to the NCAA national meet in three seasons with the program. She first competed in the pentathlon as a freshman at the 2007 meet. This year, Weber earned her second ACC championship in the pentathlon with the nation’s #2 point total (4,218). Her total was just six points shy of an ACC record.

April Sinkler will be making her first appearance at the NCAA Championships in a Clemson uniform. The sophomore from Stafford, VA was recently named the ACC’s Most Valuable Women’s Field Athlete. She did so after setting a pair of school records en route to winning the high jump and long jump at the league indoor meet.

She is an auto qualifier in the long jump with her 21’4.25″ distance at ACCs. The long jump will be her first event, scheduled for 4:15 PM Friday. She also qualified as an at-large in the high jump. She cleared 5’11.5″ at the conference meet last weekend, also a school record. The high jump is set for 6:30 PM on Friday.