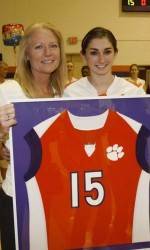 LEXINGTON, KY – The American Volleyball Coaches Association announced the eight All-Region teams on Wednesday. Clemson’s Lia Proctor, Didem Ege, and Sandra Adeleye were named to the East Region team. Additionally, Adeleye was named the East Region Freshman of the Year, becoming the third Tiger ever to win the award.

This announcement comes a week after each of the players learned they were each named to the All-ACC team as well. The Tigers were 23-10 this season and made their third consecutive NCAA Tournament. Clemson’s four All-Region selections tie Penn State and Rice for the most honorees nationally.

The All-Region teams are made up of 14 players, a Freshman of the Year, and six honorable mention selections. Players who are on all-region teams are eligible for All-America honors, announced on Dec. 16. Any player named to an All-Region team is also classified as an honorable mention All-American. Additionally, Adeleye is one of eight players eligible for National Freshman of the Year, also announced on Dec. 16.

Murphy, a three-time selection is the only player in ACC history to record 5,000 assists, 1,000 digs, and 400 blocks in a career. She guided the Tigers to three straight NCAA Tournaments, the 2007 ACC Championship, and has led Clemson to the top league hitting percentage in two of the past three seasons. This season, she ranked third in the ACC in assists/set, but was first among all setters with 100 blocks. Murphy is the fourth player in Clemson history to rack up three All-Region honors

Ege, the ACC’s Defensive Player of the Year set the ACC career record for digs (2,303) and digs per set. Ege had a career-best 36 digs against Furman in 2009, and averaged nearly 4.86 digs/set this season. She posted double-digit digs in 31 of 33 matches this season, and had 20 or more digs in 11 matches. The honor is the second of Ege’s career, as she earned the honor’s in Clemson’s 2007 ACC championship season.

Proctor was second in the ACC this season, averaging 3.80 kills per set. The senior leaves Clemson in the top ten in career kills and attempts. She posted a career-high 24 this season against Duke, and was second in the conference with 15 double-doubles. She earns her second consecutive All-Region honor. She finishes her career with 1441 kills, and ahd a career-best 69 total blocks this season.

Adeleye came on strong late, and was sixth among all ACC players in kills/set in ACC play. The freshman finished the regular season third in the ACC in hitting percentage and fourth in blocks per set. She also averaged 3.06 kills per set for the season, the highest among all league middles. She becomes only the third Tiger to garner Region Freshman of the Year honors, and the second to be named to the All-Region team. The Katy, TX native is one of only four freshmen in the nation to appear on an All-Region Team.

There are eight regions nationally, and the East Region encompasses the ACC, Big South, Colonial Conference, and the MEAC.