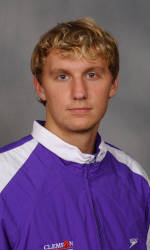 Clemson, SC – Clemson swimmers Matt Balderston, Adam Farnham, Stephen Russell and Lauren Cranston will travel to Auburn, AL to compete against some of the nation’s best in the 2007 Speedo Champions Series Southern Section beginning Thursday, July 12 and concluding on Sunday, July 15. The meet will be held at the James E. Martin Aquatics Center at Auburn University and is part of USA Swimming summer competitions. Clemson Assistant Coach Lance Asti will accompany the student-athletes at the event.

Another busy Tiger will be Stephen Russell, who will compete in the 50 free, 100 free, 200 free and 100 fly. Russell recorded the second-fastest time for the Tigers this past season in both the 50 and 100 free.

Lauren Cranston, a transfer student from North Carolina State will compete in the 200 free, 400 free and 200 back. Cranston was primarily used as a distance swimmer for the Wolfpack, where she had great success in the 1000 free.

The student-athletes were required to post qualifying times sometime within the past year in competition or must show proof of having achieved the time. Results will be available at www.usaswimming.org.