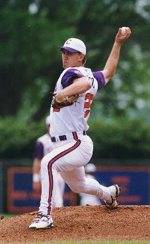 Four-Run Third Is The Difference In 8-4 Clemson Win Over N.C. State Baseball

Jarrod Schmidt, the Tigers’ starting pitcher, helped his own cause when he started the scoring for Clemson in the second inning. He sent a shot over the left field fence for his fourth home run of the year. NC State immediately threatened in the top of the third inning, loading the bases with only one out. After a strikeout to open the inning, the Wolfpack strung together back-to-back base hits by Brian Wright and Mike Prochaska, the Wolfpack’s starting pitcher. Dan Mooney boarded on a walk and then Craig Lee hit into a fielder’s choice that stopped Wright at home. Schmidt caught Jeremy Dutton looking on a third strike to retire the side.

Clemson rallied with one out in the bottom of the third to score four runs and take a 5-1 decisive advantage. After Brian Holdstad lined out to the short stop, Casey Stone reached on a single. Brian Boyd received a free ride with a walk and the Khalil Greene knocked in both Stone and Boyd with a two RBI single. Schmidt popped up to second and then Greene was batted in by Henri Stanley. Mike Calitri knocked in Jeff Baker for the Tigers’ fourth and final run of the inning.

Baker finished the day 3 for 4 with three runs batted in.

Schmidt got the win to improve to 5-0 on the season, while Prochaska was tagged with the loss having pitched 2.2 innings. He gave up the first five runs, all earned. He fell to 2-3 on the year. Matt Additon came into the game to pitch 2.1 innings. It set the school record with his 88th appearance in a Tiger uniform. The win improved the seventh-ranked Tigers to 28-7 on the year and 6-3 in the ACC. The loss dropped the Wolfpack to 20-16 and 6-9 in league play.

Clemson begins an important week Tuesday night when it hosts Georgia at 7:15 PM. South Carolina comes to Kingsmore Stadium on Wednesday at 7:15 PM and then the Tigers host conference-foe Wake Forest for three games next weekend.