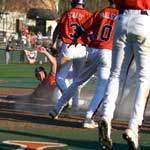 Stan Widmann’s two-out single scored the tying run and a throwing error on the play lifted #24 Clemson to a 6-5 comeback victory over UNC Greensboro on Wednesday in front of 4,132 fans at Doug Kingsmore Stadium. The Tigers won both midweek games against the Spartans by one run. Clemson improved to 9-4, while the Spartans fell to 8-5.

Widmann had the game-tying hit, a two-run single to left. Clemson’s sixth run was scored by Alex Lee on a throwing error by Spartan left-fielder Pedro Leon. John Nester and Ben Paulsen each hit solo home runs and Wilson Boyd upped his hitting-streak to 11 games in the win.

Matt Gaski finished 2-for-4 with two RBIs for the Spartans. Ricky Orton added two hits and one RBI as well.

UNC Greensboro tacked on one more run in the fourth when Orton led off the frame with a solo home run to right. It was his third long ball of the season.

The Tigers answered with one run in the bottom half of the inning. Doug Hogan led off with a single to left, stole second, and reached third on a throwing error by the catcher on the steal. Paulsen drew a walk to put runners on the corners. Jeff Schaus then plated Hogan on a groundout.

The Spartans added two runs in the fifth thanks to Greg Feltes’ fourth homer of the year, a two-run shot to center on a 1-2 pitch, to put them ahead 4-1.

UNC Greensboro took a 5-1 lead in the seventh, as Ray Quinones led off with a double to right-center and moved to third on a sacrifice bunt by Tim Carrier. Gaski then drove Quinones home with a one-out single up the middle.

The Tigers scored one run in the eighth when Nester led off the frame with a solo home run to left. It was his third homer of the season.

Clemson rallied in the ninth, as Paulsen led off with his fifth long ball of the season, a solo shot to left-center. Schaus and J.D. Burgess then drew back-to-back walks and each moved up a base thanks to a perfectly-executed sacrifice bunt by John Hinson. Two batters later with two outs, Lee drew another walk to load the bases.

With the game on the line, Widmann slapped the first pitch to left field for a single to score Schaus from third and Burgess from second, as Burgess was safe standing. Burgess made contact with the catcher, who was standing on the plate, before the ball arrived and Leon’s throw went by the catcher and to the backstop. Lee, who aggressively went to third base on the single, took off for home and slid just ahead of the throw at the plate to give Clemson the dramatic victory, it’s fifth one-run win in as many games in 2008.

Clemson will return to action when it plays host to Boston College in a three-game series this weekend beginning Friday at 4:00 PM.