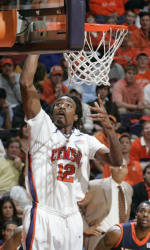 Booker was selected No. 23 overall in the June 24 draft. He was originally selected by Minnesota, but quickly traded to Washington. Washington will compete in five games in Las Vegas between July 11 and July 17. The Wizards’ first game is Sunday, July 11 at 8:00 PM against Golden State.

Booker averaged 15.2 points and 8.4 rebounds per game last season as a first-team All-ACC performer for the Tigers. He led Clemson to three consecutive NCAA Tournament appearances and finished his career in the top five in school history with 1,725 points and 1,060 rebounds.

The Orlando Summer League is already underway. Hammonds is participating in his second career NBA Summer League camp. In 2008, he averaged 7.7 points and 4.7 rebounds per game in three contests with the Orlando Magic. Hammonds – a third-team All-ACC player at Clemson in 2007-08 – has spent the past two seasons playing in Europe.

In 2008-09, he averaged 14 points per game for Darussafaka of the Turkish Basketball League. This past season, Hammonds averaged 12.9 points and 3.7 assists per game for DASH Peristeri in Greece. He did not play in Oklahoma City’s first game on Monday. The Thunder play each day this week, including Tuesday at 3:00 PM against Charlotte.

Mays was a key member of Clemson’s 2008 team that competed in the championship game of the ACC Tournament. He did not play in Monday’s game for Indiana. The Pacers also play each day this week, including Tuesday at 7:00 PM against New Jersey.

Sykes finished his career with the Tiger program in 2009 and was a part of back-to-back NCAA Tournament teams. He played the 2009-10 season with the Sioux Falls Skyforce of the NBA Development League. Sykes averaged 10.5 points and 4.7 rebounds per game during the regular season. He then spent three weeks playing in the Dominican Republic before earning the summer league spot with the Miami Heat. The Heat play five games in Las Vegas next week, beginning with a 10:00 PM contest against New Orleans on Sunday, July 11.