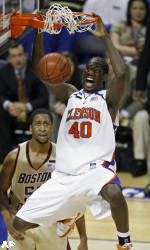 Buckner was traded in the off-season to the Memphis Grizzlies. He played in 31 games during the 2007-08 season with the Minnesota Timberwolves. Buckner has played for Dallas, Denver, Minnesota, and Philadelphia since being selected with the 53rd pick in the 1998 NBA Draft. He holds career averages of 5.4 points and 2.9 rebounds per game.

The Hopkinsville, KY native was a two-time, second-team All-ACC selection while at Clemson and started all 122 games of his outstanding career with the Tigers. He played on three NCAA Tournament teams and remains #4 on the Tigers’ all-time scoring list.

Solomon signed a free agent contract in late July with the Toronto Raptors after spending the past six years playing overseas. Solomon played the past two seasons in Istanbul, Turkey for Fenerbahce Ulker. He averaged 17.8 points per game in the regular season and 20.5 points per game in Euroleague Top 16 play. Solomon was the fourth-leading scorer in all of Euroleague last season.

Solomon was a first-team All-ACC selection as a sophomore in 1999-2000, the last Clemson player to earn the honor. As a senior, he was second-team All-ACC. He led the ACC in scoring at 20.9 points per game his sophomore season, and was fourth in the league as a senior at 19.7 per contest.

Hamilton, Clemson’s starting point guard from 2003-07, is one of five camp invites for the Cleveland Cavaliers. He was named to the team’s camp roster on Sunday. Hamilton was an All-ACC Defensive Team selection with Clemson in 2005-06 and concluded his career first in school history and sixth in ACC history with 271 steals.

Mays, a starter the past three seasons at power forward for Clemson, has been invited to camp with the Denver Nuggets. Interestingly enough, one of the players he will compete with for playing time will be former South Carolina rival Renaldo Balkman, who was signed by Denver in the off-season. Mays finished his career with the most steals by a post player in Clemson history. He averaged 10.7 points and 6.8 rebounds per game despite an injury-plagued senior season.