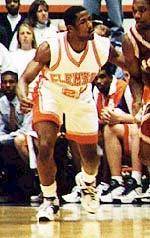 Clemson, SC – Four of the seven former Clemson players in the NBA for the 2001-02 season will be participating in the 2002 NBA Playoffs. The eight first-round series get underway this weekend.

Davis is a starter for the Portland Trailblazers and will go against Los Angeles Lakers center Shaquille O’Neal, while Buckner is an off and on starter with Dallas. The Mavericks will open the NBA playoffs against the Minnesota Timberwolves.

Clemson had a record seven former players in the NBA this past season. In addition to the four players still active in the playoffs, Chris Whitney (Washington Wizards), Will Solomon (Memphis Grizzlies) and Harold Jamison (Los Angeles Clippers) were also NBA regulars this year.

Davis ranked fourth in the NBA in offensive rebounds and was 14th in overall rebounding. He will be in his 100th career playoff game when the Trailblazers open against Los Angeles. The only Tiger basketball player in the Clemson Ring of Honor shot 70.8 percent from the foul line this year, a career best and he went over 7000 points, 7000 rebounds and 1000 career blocked shots this past season. He had 23 double-doubles in 2001-02, 28th best total in the NBA. He is now shooting .536 from the field for his career, one of the top 10 percentages in NBA history.

Grant just finished his 15th NBA regular season. He is a veteran of 1105 games, 1026 as a starter. He now has 12,747 career points and 9,202 career rebounds, more than any other former Clemson player in the NBA. He started 76 of the 82 games for Orlando this year and shot 51.3 percent from the field, the 12th time in his career he has shot at least 50 percent from the field. He is a .511 career field goal percentage shooter and owns three NBA World Championship Rings, all during his career with the Chicago Bulls.

Campbell ranked 19th in the NBA in blocked shots this year. His 13.9 scoring average was his best since the 1996-97 season and his .484 field goal percentage was his best since shooting a career best .503 in 1995-96. He will need just 19 points in the first regular season game next year to reach 10,000 points for his career. This past season he went over 1500 career blocked shots and he shot .797 from the foul line, also a career best. He scored at least 20 points in 16 games and had 15 double-doubles.

Whitney had his finest year as a professional, scoring a career best 10.2 points per game. The former Clemson junior college transfer also shot 88 percent from the foul line, seventh best in the NBA. He was fourth in the league in assist/turnover ratio (3.69) and was 20th in total three-point goals made with 133. He is now a .878 career free throw shooter and needs just six three-point goals next year to reach 500 for his career.

Solomon played in 61 games as a rookie with the Memphis Grizzlies. He had four starts and averaged nearly 14 minutes per game. He had 12 double figure scoring games, including nine games with at least 10 in his final 21 contests. He had a season high 23 points against Orlando on January 19th and had 14 points in just 18 minutes against the New Jersey Nets on St. Patrick’s Day.

Jamison completed his second year in the NBA with a .512 field goal percentage. He had his first career double-double against the Miami Heat on Feb. 20 when he had 14 points and 10 rebounds in 27 minutes as a sub for All-Star Elton Brand.