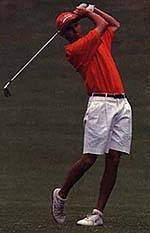 Clemson, SC – Former Clemson golfer Joey Maxon shot an eight-under par 136 for 36 holes on Monday in Atlanta, GA and qualified for the 2001 United States Open. He was one of four golfers from the field of 64 to qualify from the sectional tournament held at the East Lake Country Club.

The US Open will be held June 14-17 at Southern Hills in Tulsa, OK.

Maxon will be playing in his first US Open, his first major for that matter. He has competed in PGA Tour events previously. He had rounds of 66-70 for his 136 score, third best among the competitors on Monday. Also qualifying from Atlanta were former Georgia Tech All-American Bryce Molder, longtime professional Billy Andrade and Charles Raulerson, now a pro on the Buy.com Tour. Raulerson was a member of the Clemson team in 1983 and 1984 before transferring to LSU to finish his collegiate career.

Maxon was an honorable mention All-American at Clemson in 1998 when he joined classmate Charles Warren in leading the Tigers to a second-place finish at the NCAA Tournament in Albuquerque, NM. Maxon, an All-ACC player in 1996 and 1998, shot a 10-under-par 278 in the 1998 NCAA Tournament to finish 10th.

It was Maxon’s second career top 10 at the NCAAs, as he finished ninth at the 1996 event at the Honors Course in Chattanooga. Maxon was also an honorable mention All-American that year. Maxon and Warren are the only players in Clemson history to record two top 10 finishes at the NCAA Tournament.

This is the second consecutive year a player with Clemson ties will play in the US Open. In 2000, Warren and former Clemson All-American Kevin Johnson played in the 100th US Open at Pebble Beach. Warren made the cut. Warren is a member of the Buy.com Tour this year, but has not played in a tournament in 2001 due to a shoulder injury. Johnson is in his first year on the PGA Tour.

John Engler, a first-team All-American for this year’s Clemson team that finished second in the nation at the NCAAs at Duke last week, had rounds of 67-72 at East Lake on Monday and is an alternate for the 2001 US Open. Engler was sixth at the sectional tournament, tied with former Clemson golfer Tommy Biershenk, who had rounds of 65-74. D.J. Trahan, a sophomore on the 2001 Clemson team and the Tigers top player at the 2001 NCAAs with a seventh-place finish, had rounds of 73-76 on Monday and did not qualify.

Ben Duncan, a sophomore on the 2001 Clemson team, competed in the sectional qualifying held at Woodmont Country Club in Rockville, MD and had rounds of 77-70 for a 147 total. He did not qualify for the US Open.

Former Clemson All-American Jonathan Byrd will compete for a spot in the US Open on Tuesday when he will play 36 holes at Colonial Country Club in Memphis, TN. Byrd is currently second in money earnings on the Buy.com Tour.