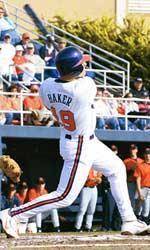 Clemson, SC – Former Clemson All-American Jeff Baker had four doubles in four at bats to tie a Major League Record for the Colorado Rockies in a game against the Chicago Cubs at Wrigley Field in Chicago on Friday afternoon. Despite Baker’s heroics, the Cubs won the game 10-9.

Baker established a club record with the four doubles. The previous record was three in a game established on 27 different occasions. Baker tied the Major League Record for consecutive doubles in the same game with four. Baker’s hitting helped Colorado to a 9-4 lead after seven innings. He was taken out of the game at that point, then the Cubs rallied for the win.

Baker, who is in his fourth season with the Rockies, is now hitting .233 in 32 games so far this season. He has 17 hits for the year, but nine of them are doubles. He has already established a career high for doubles in a season. Combined with current San Diego Padres shortstop Khalil Greene, Baker helped Clemson to College World Series appearances in 2000 and 2002.